The Real Little House on the Prairie

On Laura Ingalls Wilder’s 150th birthday, we take a modern-day look at a few of the places she described in her books.

Laura Ingalls Wilder (Feb. 7, 1867 – Feb. 10, 1957) has taught generations about the hardships of living on the frontier – as well as the joys. Her Little House series chronicled her family’s real-life moves around the Midwest in the waning years of the 19th century. Readers have gotten to know the various locales Wilder described, but only what they were like more than 100 years ago. We wondered: What are these towns like today? In honor of her 150th birthday celebration, we take a modern-day look at a few of the places she described in her books. 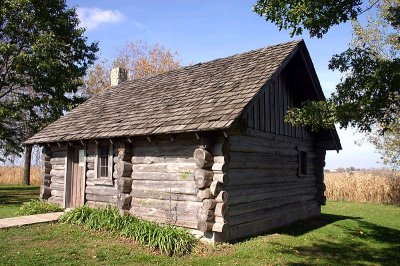 Pepin, Wisconsin. In Little House in the Big Woods, the Ingalls family lived in a cabin (the place where Laura was born) near Pepin, in west central Wisconsin. The family homesteaded with a garden, field crops and livestock, and they hunted, collected wild honey, and tapped maple trees for their syrup. Pepin remains a small town today, with fewer than 900 residents and a small business district. But they celebrate the life of their famous native each year with a “Laura lookalike” contest, traditional music and crafts, and other events. Near Pepin is a small cabin, a replica of the Ingalls’ home, known as the Little House Wayside. When the family lived in that spot, their cabin was surrounded by dense woods, but today the cabin sits near wide-open farmland with few trees.

Independence, Kansas. The Ingalls family journeyed to a very different world in Little House on the Prairie. From the woods of Wisconsin, they made their way to the grasslands of southeast Kansas, near the town of Independence. The family met difficulties here they hadn’t experienced farther north, from disease to clashes with the Native Americans who owned the land on which they settled. Today, Independence is a thriving mid-sized town with other notable natives to its credit, like playwright William Inge. Inge is even more celebrated in Independence than Wilder, with a museum, an annual festival, and a playwrights’ achievement award in his name. Wilder isn’t forgotten, though: here too, a replica of the Ingalls family house has been built and designated as a historical site, along with the post office and one-room schoolhouse.

You might also like: Little House on the Prairie photo gallery, a tribute to the stars of the television show. 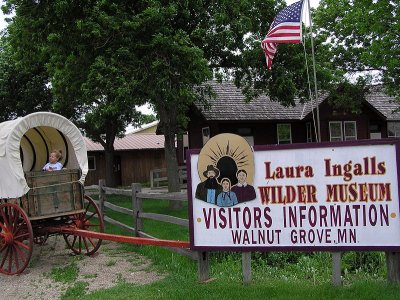 Walnut Grove, Minnesota. When they discovered the land the government granted them wasn’t rightfully theirs, the Ingalls family moved back north, eventually settling near Walnut Grove as featured in On the Banks of Plum Creek. In the story, it was here that Laura met Nellie Oleson, one of the original mean girls, but she was the least of the family’s worries as they contended with a plague of locusts that decimated their crops, as well as hard northern weather. The southwest Minnesota town of Walnut Grove still endures difficult winters today, but not everything remains the same more than 130 years later. The town’s demographics have changed with a community of Hmong families now making up a substantial percentage of the population. With fewer than 1000 residents the town remains small, but it too celebrates its famous native daughter. The Laura Ingalls Wilder Museum and the Wilder Pageant are popular tourist attractions. This July, fans can meet the actors who played Nellie Oleson and Miss Beadle on the Little House TV series – as well as visit the site of the Ingalls dugout home, preserved as an historical landmark.

De Smet, South Dakota. The family that rarely settled anywhere for long found a longer-term home in De Smet. From 1879 to 1894, Laura lived in De Smet, first with her parents and later with her husband Manny. Those years are chronicled in five books, from By the Shores of Silver Lake to On the Way Home. The Ingalls family watched the town grow while they suffered through more difficult winters and welcomed son-in-law Manny to the family. De Smet, located in east central South Dakota, encourages fans of the books to come learn more about Laura Ingalls Wilder’s life. With just over 1000 residents it’s a small town, but one with a rich sense of its history. At a yearly pageant, the story of the family’s arrival in town is reenacted, and most residents know at least a bit about the family’s life to share with interested tourists. It was in De Smet that Rose Wilder Lane was born, daughter of Laura and Manny and a writer herself. Another notable resident was Walter Breuning, who at 114 lived to be the third oldest man in recorded history.

The world marches on, and in another century and a half, each of these towns is sure to be an even farther cry from what it was when the Ingalls family called it home. But given the enduring popularity of the Little House series, it seems likely that the tributes to Laura Ingalls Wilder, as well as her family and her work, will remain.