The Women Who Suffered for Suffrage

Thousands of women marching on Washington is nothing new. We remember the women of a century ago who took to the streets and demanded the right to vote. 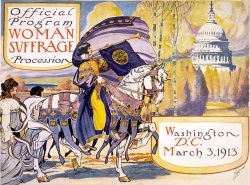 Thousands of women marching on Washington is nothing new. We remember the women of a century ago who took to the streets and demanded the right to vote.

The Suffrage Parade of 1913 brought together women from all over the country, all of whom were ready to take their place as equal citizens in a nation where many weren’t ready for them. Catcalling and jeering spectators crowded into the street and injured hundreds of the marchers, yet another in a long list of incidents that saw suffragists abused and insulted in their quest for equality. Like the abolitionists of a half-century earlier and the civil rights crusaders who would follow another half-century later, these women endured much – and eventually they, too, overcame.

There’s no record of all the women who marched for their rights on March 3, 1913 – indeed, reports of the number in the parade vary from 5000 to more than 8000, and many of those thousands of names are lost to history. But we do know of some of the prominent people who were there, women who made equality the fight of their lives. Today, we’re remembering five of these crusaders. 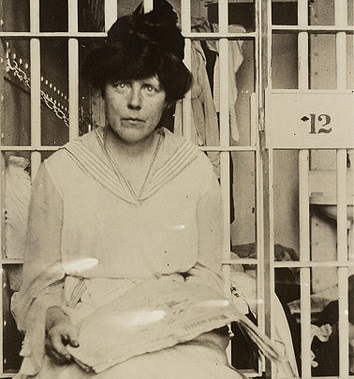 Lucy Burns, one of the two primary organizers of the march, was a member of the National American Women Suffrage Association who devoted more than a decade to the fight for the vote. In the years that followed the Suffrage Parade, Burns was arrested again and again for protesting and picketing at the White House. Of all the prominent suffragists, Burns spent the most time in jail – enduring solitary confinement, brutal treatment, and force-feeding when she conducted a hunger strike. By the time the Nineteenth Amendment was ratified in 1920, giving women across the country the right to vote, Burns was so exhausted that she gave up all activism for the rest of her life. 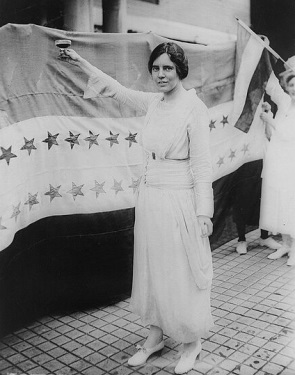 Alice Paul was a close friend and associate of Lucy Burns and one of the more militant and outspoken leaders of the women’s suffrage movement in the U.S. In the years before organizing the parade with Burns, Paul worked toward suffrage in England, using techniques that seem aggressive even by today’s standards. On one occasion, she posed as a cleaning woman at a banquet for the Prime Minister – then interrupted his speech by throwing shoes, breaking windows, and screaming, “Votes for women!” After returning to the U.S., Paul continued to work for equality and was arrested and mistreated along with Burns, but she continued to fight. After the passage of the Nineteenth Amendment, Paul didn’t stop. In 1923, she composed the earliest draft of the Equal Rights Amendment. 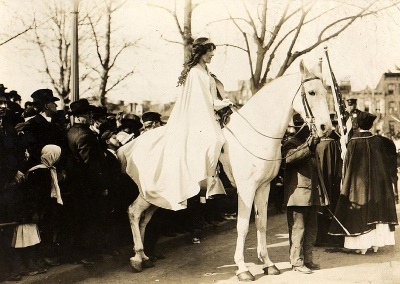 Parade organizer Inez Milholland also led the march, dressed in a white cape and a crown and riding a white horse. Well before 1913, Milholland was an activist, even dating back to her college days at Vassar, when she was suspended for organizing suffrage meetings among the students. A lawyer, Milholland also protested World War I and worked with the socialist journal The Masses. Milholland wouldn’t live to see the Nineteenth Amendment passed – she died of pernicious anemia in 1916, at the age of 30. Her last known words were uttered in a speech she was giving when she collapsed into her final illness: “Mr. President, how long must women wait for liberty?” 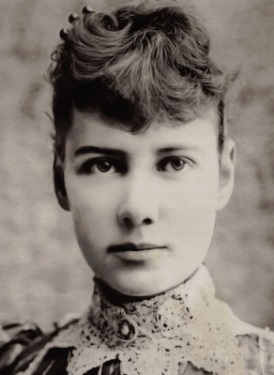 Pioneering journalist Nellie Bly was there both as one of the parade’s heralds and to cover the event for the New York Evening Journal. Her bold headline read, “Suffragists are Men’s Superiors.” As a journalist, Bly was notorious for the daring assignments she took, unsatisfied with the quieter, homier topics assigned to most women in journalism. She voluntarily traveled to Mexico to serve as a foreign correspondent; she feigned insanity in order to be committed and write an exposé on the asylum; she set a world record by traveling around the world in 72 days. In later years she covered Europe’s Eastern Front during WWI, as well as the suffrage march, after a stint as president of the Iron Clad Manufacturing Co. She was truly a force of nature for women’s equality. 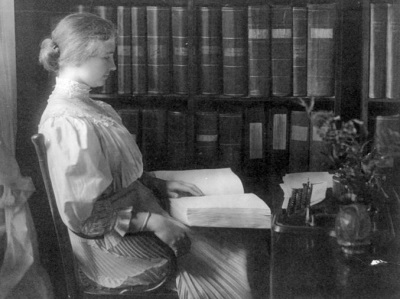 Helen Keller was, like Bly, already well known by 1913. The famous advocate for people with disabilities was also a fervent pacifist, supporter of the working class and suffragist. She had been tapped to give a speech at Constitution Hall after the parade, but the onlookers’ brutal treatment of the marchers was perhaps doubly terrifying to the blind and deaf Keller, who couldn’t anticipate the violence until it was upon her. She was so shaken and exhausted that she was unable to give her speech. Still, that didn’t diminish her fierce contributions to the suffragists’ cause.

One hundred years later, it can be hard for today’s young women in the U.S. to imagine a world in which women are not allowed to vote or even speak their minds. The abridged versions of the suffragists’ stories that we hear in school and the media don’t always include the jail sentences, the beatings and bullying, the violence these women endured. It’s worth remembering that there were thousands of women who came before us who offered their blood, sweat and tears for our equality.