We Remember the Munich 11

In Munich 1972, Olympic joy turned to tragedy when Israeli athletes and coaches were kidnapped and murdered.

In the summer of 1972, athletes and coaches from around the world gathered in Munich, West Germany, for the Games of the XX Olympiad. The joy and excitement of the Munich Olympics came to an end when members of the Israeli Olympic team were kidnapped, held hostage, and then killed. It was without a doubt the most terrible moment in modern Olympic history.

The names of the eleven athletes and coaches murdered in Munich should never be forgotten.

David Berger, 28, was an NCAA champion weightlifter and gold medalist at the U.S. Junior National Weightlifting competition. A native of Cleveland, Ohio, Berger was an honor student at Tulane University and then earned his MBA and JD from Columbia University before immigrating to Tel Aviv to open a law office.

Ze’ev Friedman, 28, a native of Poland whose parents fled the Nazi regime for Siberia, began his athletic career as a gymnast before switching to weightlifting. He settled in Israel as a teen and became a physical education teacher and an Israeli champion lifter. His 12th place finish in Munich was one of the best Olympic performances by an Israeli athlete up to that time.

Yossef Gutfreund, 40, was a wrestling referee who was participating in his third Olympics. A native of Romania, he attended medical school and intended to become a veterinarian, but eventually took up wrestling.

Eliezer Halfin, 24, was a Latvian-born wrestler whose father was a Holocaust survivor. Halfin had completed his military service just before the Olympics and was excited about the 1972 games – but thought his best chance to medal would be four years later in Montreal.

Yossef Romano, 32, was a Libyan-born weightlifter and military veteran. A 9-time Israeli weightlifting champion, he injured his knee in Olympic competition and was set to fly home for surgery the day after the initial attack. Romano died attempting to subdue the terrorists.

Amitzur Shapira, 40, a former short distance runner and long jumper, was the top track coach in Israel. He coached Esther Shahamorov-Roth to the semifinals at Munich, where she set an Israeli record.

Kehat Shorr, 53, was an expert marksman and the shooting coach for the Israeli team. The Romanian native escaped internment by the Nazis during World War II by hiding in the Carpathian Mountains, where he was part of a group who helped other persecuted Jews escape from cities.

Mark Slavin, 18, was a U.S.S.R. native who had moved to Israel only months before the Olympics. The middleweight wrestler developed his skill when he was encouraged by his parents to fight back against anti-Semitic bullies in school. He was scheduled to compete – his international debut – on the day the terrorists took him hostage.

Andre Spitzer, 27, Israel’s top fencing coach, believed strongly in the Olympic ideal of competition without politics, and was excited to see it in action in Munich. His only daughter was born two weeks before he left for the games.

Yakov Springer, 51, was a weightlifting referee who helped establish the sport in Israel. A native of Poland, he fled the country during the Holocaust. The Munich Olympics were the fifth games he had participated in.

Moshe Weinberg, 32, was the coach of Israel’s wrestling team and a former wrestling champion himself. Weinberg was the director of Israel’s physical education center, the Wingate Institute. He died attempting to subdue the terrorists.

As we remember these eleven men, the most important thing we can say in memory of them is this: May it never happen again. 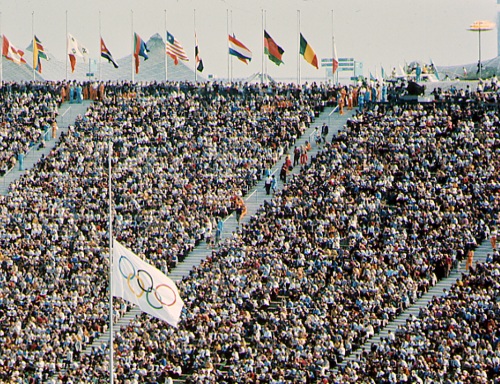 The Olympic flag, foreground, and flags of participating nations are flown at half-staff during a commemoration ceremony for the victims of the Munich Olympic massacre at the Munich, southern Germany, Olympic stadium in this Sept. 6, 1972 file photo. A 20-hour standoff at the Olympic Village, where a Palestinian terrorist group seized members of the Israeli Olympic team at their quarters at the Munich Olympic Village on Sept. 5, 1972, ended in a tragically botched rescue effort at the airport. In all, 11 Israeli athletes, five of the Palestinians kidnappers and a German policeman were killed. (AP Photo)