Beatrix Potter’s “The Tale of Peter Rabbit” is one of the great children’s stories of all time.

Written more than 100 years ago, Beatrix Potter’s “The Tale of Peter Rabbit” is one of the great children’s stories of all time. 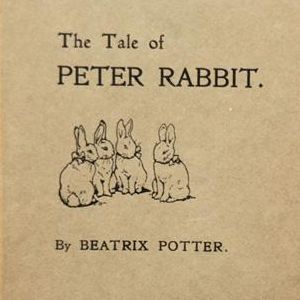 Yet her sweet story of bunny adventures barely seems dated, and her charming illustrations are still beloved by children today. Just as enduring are the lessons learned by generations of children as they read about naughty Peter and his better-behaved sisters, Flopsy, Mopsy and Cotton-tail. The best children’s books entertain as they teach, and Potter’s stories did both with ease.

The Tale of Peter Rabbit follows a classic children’s story template of adventure and danger. After being told not to go into Mr. McGregor’s garden, Peter does anyway, seduced by the delicious vegetables grown by the farmer. After sneaking in and gorging on his favorites, Peter is seen! Mr. McGregor gives chase, and Peter is very nearly caught and put into a pie, just as his father was. In the end, he escapes and returns home, very tired –– and perhaps more ready to behave next time (or perhaps not). Along the way, Peter teaches his young readers a few life lessons. On the anniversary of Potter’s death on 22 December 1943, here are our top five lessons from The Tale of Peter Rabbit.

5. Dream big. Peter Rabbit was a dreamer who jumped way out of his comfort zone when he ventured into Mr. McGregor’s garden. Not every adventure ends in near-tragedy as Peter’s did, and life is more interesting when we test the boundaries of our worlds. 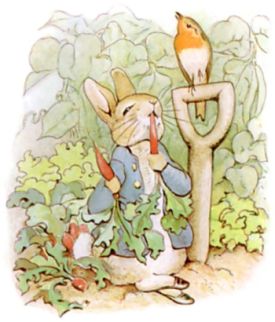 4. Eat your veggies. What was the first thing Peter did in Mr. McGregor’s garden? Why, he ate his veggies, of course! Peter ate so many lettuces, beans and radishes that he had to follow his meal with a bit of parsley to calm his over-full stomach. Any parent who has struggled with a child who won’t eat anything green will appreciate Peter’s choice of snacks.

3. Never give up. There came a point in Peter’s adventure when things started to look dire. He was caught in a fence, and Mr. McGregor was hot on his heels. Peter was tired and confused, close to giving up. But some friendly sparrows begged him to keep trying. Their chirps were the motivation Peter needed to free himself. That’s a great lesson from the humblest of birds.

2. Chamomile tea for what ails you. When Peter finally escaped Mr. McGregor’s garden and got home, he was so exhausted he couldn’t tell his mother what had happened –– even if he had wanted to confess!. Her mother’s intuition probably told her that her boy had been up to no good, but she treated him with kindness, sending him to bed with some chamomile tea to calm him down. Anyone who has had a cup of chamomile on an agitated day knows her home remedy was spot-on.

And, of course, the most important lesson of The Tale of Peter Rabbit:

1. Listen to your mother. It’s on page one of Peter Rabbit that Peter’s mother tells him not to go into Mr. McGregor’s garden. If Peter had listened, there wouldn’t be a story –– but it was still sound advice. Mothers almost always seem to know what’s best, and Mrs. Rabbit was no exception. We hope all the little Peters out there (and the Flopsys, Mopsys and Cotton-tails, too) will remember to listen to their mothers.