By Legacy Staff May 6, 2013
0
FacebookTwitterEmail

In 1930, Marlene Dietrich was unlike anything the world had seen.

In 1930, Marlene Dietrich was unlike anything the world had seen.

It’s not that she was the first woman to dress as a man. Certainly, that had happened before, both for entertainment and for subterfuge. But Dietrich elevated drag to an art form – one that has been endlessly imitated in the decades since. She wasn’t hiding her femininity, trying to pass as a man. Instead, she enhanced it with top hat and tails, giving menswear a beauty it had never seen before. 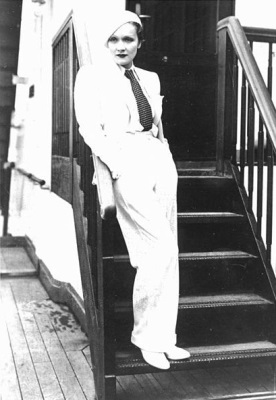 And then there was that kiss. Flouting the newly established Motion Picture Production Code, Dietrich kissed another woman in the 1930 film Morocco. It was shocking and funny to the characters in the film – and practically unheard-of to moviegoers. It was one of many ways in which Marlene Dietrich pushed the boundaries of her time.

But Dietrich’s career wasn’t always about blurring gender lines. Playing the same shtick over and over would have been far too boring for such an incomparable star. Instead, she kept her persona fresh, doing things we never quite expected.

She took on a variety of movie roles – like the bawdy, singing saloon girl in Destry Rides Again…

Dietrich’s personal life was as tantalizing and sexy as her on-screen persona. She carried on numerous affairs with both men and women, caring little who knew about them. Among her conquests, she counted Yul Brynner, John F. Kennedy (and his father too), Mercedes de Acosta, John Wayne, Edith Piaf, James Stewart…

But Dietrich was much more than a sex symbol. When World War II rolled around, she did her part and then some, earning a Medal of Freedom and Legion d’honneur for her work. Though a native of Germany, Dietrich was staunchly anti-Nazi. She became a U.S. citizen in 1939 and was one of the first celebrities to support the war effort, selling war bonds and tirelessly entertaining the troops in the U.S., the Pacific and Europe. She also helped the U.S. prevail over Germany in a way that was rather unique. As part of operation Musak, Dietrich recorded several of her signature songs in German. The sentimental tunes were played for the German troops and helped combat Nazi propaganda and lower morale among German soldiers who, against the orders of their superiors, craved hearing the music. Dietrich’s “Lili Marlene” was especially effective.

Dietrich continued a wildly successful cabaret career into her 70s, dressing in and out of drag and performing a scathing version of anti-war anthem “Where Have All the Flowers Gone?”

All her life, until her death 21 years ago today, Marlene Dietrich blazed her own trail, with little regard for what anyone else thought was proper. It’s why we still find her fascinating today.