Nelson Mandela lived a life that inspired the world. Here are 20 of our favorite facts about the great leader.

Nelson Mandela lived a life that inspired the world. Here are 20 of our favorite facts about the great leader.

1. Mandela was born July 18, 1918, in the village of Mvezo in Umtatu, South Africa. His given name was Rolihlahla, which means “troublemaker” in his native language of Xhosa.

2. Mandela was the son of his clan’s king, but he wasn’t in line to inherit the throne, as his mother was from a different clan.

3. As a young boy, Mandela tended his family’s herd of cattle, but when he was seven, his mother, a devout Christian, enrolled him in the local Methodist school. It was there that he gained the name Nelson, given to him by his teacher. He was the first of his family to attend school.

4. At 18, Mandela enrolled in Clarkebury Boarding Institute, a Western-style school for black Africans. There, he became a prefect and developed interests in long-distance running, boxing and gardening.

5. Next Mandela attended the University of Fort Hare. He studied politics, anthropology and more, and he took up ballroom dancing and acting,

6. When Mandela learned in 1940 that a marriage had been arranged for him, he fled to Johannesburg to escape his fate. He took a job as a clerk at a law firm, and he got his first taste of political action, attending Communist Party events (though he never joined) and marching in support of a bus boycott against fare hikes.

7. Mandela attended law school at the University of Witwatersrand, the only native African student enrolled. There, he became active in the African National Congress (ANC), through which he met the woman who would soon become his first wife, Evelyn Mase.

8. Mandela rose to the presidency of the ANC in 1950, and he began leading nonviolent protests against South Africa’s institutionalized racism.

9. Tensions between the government and the ANC rose in the late 1950s, and Mandela began advocating armed and violent resistance.

10. As Mandela’s politics became increasingly fiery, his relationship with Evelyn disintegrated and they got a divorce. Soon Mandela met and married the young activist Winnie Madikizela.

11. By the early 1960s, Mandela’s revolutionary activities were so reviled to the government that he had to travel incognito and hide out while organizing further protests and activism. In 1962, he was captured and charged with inciting workers strikes and leaving the country without permission. A second trial charged him with sabotage and conspiracy to violently overthrow the government. Mandela was sentenced to life imprisonment.

12. While Mandela was in prison, his story became internationally known. Lovers of equality all over the world began calling for his release.

13. After the fall of the Berlin Wall in 1989, South African President F.W. de Klerk made arrangements for Mandela to be freed and the ANC to be recognized as a legal political party. It was a huge step in the direction of equality and freedom, and Mandela’s release Feb. 11, 1990, was celebrated all over the world.

14. Mandela and the ANC immediately began working to dismantle apartheid. 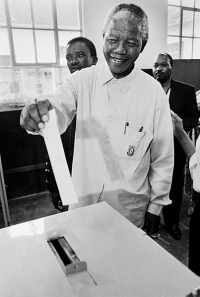 15. In 1994, South Africa held its first Democratic election open to all races. Mandela, running with the ANC, won the presidency with 62 percent of the vote. He was the first black president of South Africa in the first election in which blacks were allowed to vote.

16. Mandela voluntarily served only one term as president, in order to set a precedent for the regular election of new leaders.

17. After his retirement from the presidency in 1999, Mandela remained active in public life, focusing on combating AIDS in Africa and speaking out against military actions by the United States and United Kingdom.

18. Though Mandela’s marriage to Winnie survived his 27-year imprisonment, it crumbled after his release. On his 80th birthday, he married Graça Machel, to whom he remained wed until his death.

20. Mandela’s legacy is huge, but it’s summed up by the way his countrymen and women view him: to them, Mandela was the founding father of their democracy and the most important South African of all time. At home and all over the world, he is loved and, now, mourned.