By Legacy Staff May 11, 2011
0
FacebookTwitterEmail

Born this day in 1904, Salvador Dalí is best remembered as one of the iconic painters of the 20th century. Today we’re examining some of the work he did away from the canvas.

Born this day in 1904, Salvador Dalí is best remembered as one of the iconic painters of the 20th century. But today we’re examining some of the work he did away from the canvas.

Salvador Dalí emerged as one of the most high-profile artists of his time, his famed surrealist paintings of melting clocks, spindly-legged elephants traversing desolate landscapes, and recontextualized religious iconography today familiar from T-shirts, calendars, coffee mugs and dorm room posters. But Dalí did more than paint, contributing to avant-garde and Hollywood films, designing furniture and jewelry, and even acting as a pitchman in TV commercials.

FilmAs a child in the Cataluña region of Spain, Dalí would often visit the cinema on Sundays, so it’s little wonder he developed a fascination with film. Later he would realize its potential to portray dream logic using imagery of the irrational, collaborating with filmmaker Luis Buñuel on two films, including the shocking 1929 short Un Chien Andalou.

Their next project together, the blasphemous L’Age D’Or, which produced near riots at its first screenings, was excoriated by right wing critics and banned by several countries in Europe. The film was withdrawn from circulation by its producers for decades afterward its initial release, and, aside from a 1933 MoMA screening, didn’t get its official U.S. debut until a showing in San Francisco in 1979. Though Dalí was involved in writing the film, he and Buñuel had a falling out shortly before production, but having Dalí’s name attached helped market the notorious film. Dalí claimed to have split with Buñuel because the latter was a communist and atheist, while Buñuel said he rejected Dalí’s attempts at reconciliation later in life.

As Dalí’s fame grew, he would move from provocative avant-garde films to work-for-hire pieces for Hollywood. He designed the famed dream sequence for Hitchcock’s Spellbound, a suspense film that dealt with psychoanalysis and repressed experiences. Lesser known is the work Dalí did with Walt Disney on the film Destino, a short that Disney animators worked on for eight months before abandoning it when their funding ran out. Under Walt’s nephew Roy Disney, the company resumed work on it decades later, and in 2003 finally gave the film a very limited release, airing it first on French television and later showing it in some theatres before the film Calendar Girls. It was nominated for an Academy Award for Best Animated Short. His projects still as yet unrealized include a film scenario he wrote for French actor Jean Gabin called Moontide. 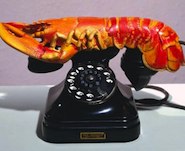 Dalí designed several functional objects in addition to those works more traditionally viewed as sculptures. He brought a whimsicality to his object design, as seen in his famous Lobster Phone (also known as the “Aphrodisiac Telephone”). Made for patron Edward James, its exactly what it sounds like – the unexpected conjunction of a plaster lobster and an actual working telephone. In 1937, he also created a wood and silk sofa shaped like the lips of Mae West, an actress he was fascinated by.

Beginning in 1941, Dalí also dabbled in jewelry design, his most famous creation in this arena being “The Royal Heart,” a piece made of gold and encrusted with rubies, diamonds and emeralds. In Cataluña there is a permanent museum dedicated to his jewelry collections, many pieces having been acquired from the private collections of wealthy Japanese and Saudi owners.

TV Commercials Perhaps Dalí’s greatest creation was himself, an eccentric, self-aggrandizing showman assured of his own genius and always ready with a provocative quote (also, let’s not forget the mustache). Even early in his career, many fellow artists dismissed his flamboyant clowning, saying it denigrated his art. It was one reason he was expelled from the Surrealists after a mock trial in 1934. He was not above capitalizing on his image by shilling for various products, a practice that helped earn him the anagrammatic nickname ‘Avida Dollars,’ as coined by fellow artist André Breton. Products he endorsed included Lavin chocolate bars, Corona beer, Veterano brandy, the Saint Regis Hotel, and Alka-Seltzer antacids.