Frank Lloyd Wright – “the greatest American architect of all time” – died April 9, 1959. To mark the anniversary of his passing, we bring you 50 facts about the groundbreaking architect.

Acclaimed architect Frank Lloyd Wright died April 9, 1959. To mark the anniversary of his passing, we bring you 50 facts about the groundbreaking architect.

1. Wright was recognized in 1991 by the American Institute of Architects as “the greatest American architect of all time.”

3. He also designed a gas station in Cloquet, Minnesota, that remains open to this day.

4. Originally named Frank Lincoln Wright (his middle name a tribute to Abraham Lincoln), he changed his middle name to honor his mother’s family, the Lloyd Joneses, who were immigrants from Wales.

8. Early in his career, he was fired from the Adler and Sullivan firm in Chicago for “moonlighting” by designing houses without the firm’s approval.

9. Wright constructed buildings in the United States, England, Japan and Canada. In 2007 one of his later designs was realized in the Republic of Ireland.

10. You may find Wright-designed buildings in 36 states, with Illinois and Wisconsin boasting the majority.

11. Oak Park, Illinois is home to the largest collection of Wright works, with 25 houses and buildings constructed between 1889 and 1913.

12. In May 1957 he visited Baghdad, Iraq and planned to build there before a change in government nixed his plans.

13. Wright was married three times and had seven children.

14. In 1889 he married his first wife, Catherine “Kitty” Tobin, daughter of a wealthy Chicago businessman.

15. Of Chicago he once said, “Eventually, I think Chicago will be the most beautiful great city left in the world.”

16. In 1909 Wright left his wife and children to go to Europe with mistress Mamah Cheney.

18. In 1914 a servant set fire to Taliesin and murdered seven of its occupants as they tried to flee the burning house. Among them was Ms. Cheney.

19. Wright lost Taliesin in 1922 when he went bankrupt and was evicted by his creditors.

20. He eventually regained ownership of the Taliesin home, but it was destroyed in a second fire in 1925. He rebuilt once more.

21. Wright married his second wife, Miriam Noel, in 1923. She was addicted to morphine and the marriage lasted less than a year.

22. He married his third wife, a dancer from Montenegro named Olgivanna Ivanovna Lazovich, in 1928. He was 31 years her senior.

23. In 1932 Wright founded the “Taliesin Fellowship,” an apprenticeship school devoted to teaching not just architecture, but farming, gardening, cooking, music, art and dance.

25. Actor Anthony Quinn once applied to study with Wright at Taliesin. Wright suggested he take voice lessons to help overcome a speech impediment.

26. According to Wright, “A doctor can bury his mistakes but an architect can only advise his clients to plant vines.”

28. The Imperial Hotel did survive the 1923 earthquake that destroyed much of Tokyo, though it suffered irreparable structural damage to its foundations.

31. Wright was an active dealer in Japanese art. During the Depression, he made more money selling art than from his work as an architect.

33. The song “So Long, Frank Lloyd Wright” was written by Paul Simon as a way to say goodbye to his architecture-loving friend, Art Garfunkel.

34. Wright was the inspiration for Ayn Rand’s The Fountainhead.

35. He appeared as himself in Nancy Horan’s novel Loving Frank and T.C. Boyle’s Women. (Boyle lives in a house designed by Wright.)

36. Wright once said, “Buildings, too, are children of Earth and Sun.”

37. He sketched the designs for his most famous house, Fallingwater – the most famous modern house in the world – in less than three hours.

38. The Vanndamm house in North by Northwest was not designed by Wright, but by set designers Robert Boyle, William A. Horning, Merrill Pye, Henry Grace and Frank McKelvey – acting on Alfred Hitchcock’s instructions to create a Wright-like home because hiring Wright himself was prohibitively expensive.

39. Wright was approached to design buildings for the set of King Vidor’s adaptation of The Fountainhead, but Warner Bros. balked when he demanded a fee equal to 10 percent of the film’s total budget.

41. In 1956 Wright appeared on What’s My Line? as a Mystery Guest. The other Mystery Guest that night was Liberace.

42. Wright had a penchant for fast cars, which led to many speeding tickets.

43. Of Los Angeles he once said, “Tip the world over on its side and everything loose will land in Los Angeles.”

44. Of New York he once said, “New York City is a great monument to the power of money and greed.” 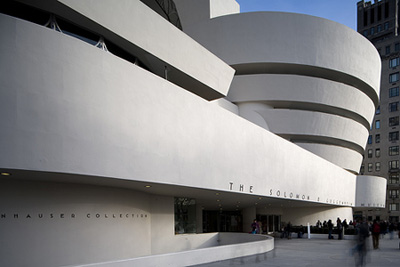 46. The Guggenheim’s spiral-ribbon shape makes a sharp contrast to the boxy Manhattan buildings that surround it. Wright was delighted with this and said his design would make the nearby Metropolitan Museum of Art “look like a Protestant barn.”

47. In addition to designing buildings, Wright designed stained glass windows and furniture for many of his homes’ interiors, some of which are on permanent display at the Metropolitan Museum of Art.

48. Though Wright was known for designs that hugged the earth and followed the natural inclinations of the land, he did design one skyscraper – the 19-story Price Tower in Bartlesville, Oklahoma.

49. If you would like to sleep in a Wright house, some that now lodge overnight guests include the Louis Penfield House in Ohio, the Haynes House in Indiana, the Schwartz House in Wisconsin, the Muirhead Farmhouse in Illinois, the Duncan House in Pennsylvania and the Seth Peterson Cottage in Wisconsin.

50. Frank Lloyd Wright never retired, but worked until his death in Phoenix, Arizona, at the age of 91. The epitaph at his Wisconsin grave site reads: “Love of an idea is the love of God.”