Home > News & Advice > The Most Inspirational Tributes of 2013

The Most Inspirational Tributes of 2013

These are the stories from 2013 that helped us remember there’s goodness in the world.

In a year when so many of the news headlines seemed to scream at us, stress us out or make us throw up our hands in exasperation, there were a few sweeter stories. These were the tales of people who remembered their lost loved ones in very special ways. Some raised money for good causes, while others paid tribute through artistic expression or other methods, but there’s one common thread to the stories shared below: They’re all moving and inspirational tributes to loved ones gone too soon. These are the stories from 2013 that helped us remember there’s goodness in the world. Recreating Her Photos: When Ali Nunery died of a rare form of lung cancer at 31, she left behind a devastated husband, Ben, and a 1-year-old daughter, Olivia, who would never be able to remember her mother fully. As Ben worked through the deep emotions surrounding his wife’s too-young death, he lit upon a beautiful way to involve Olivia in memorializing Ali. He recreated some of his favorite photos of himself and his wife, with Olivia standing in for Ali. The results are lovely and touching. Read more

Giving it Forward: Jeffrey Szatkowski and Nicole Surace were high school sweethearts, a football star and a cheerleader who were beloved in their New Jersey hometown. When they died in a car accident over Thanksgiving weekend, their devastated friends and family sought a way to find hope in the tragedy. They created a fundraiser on GiveForward.com with the intent of establishing a college scholarship. Their initial fundraising goal of $2,500 has been far surpassed as the fund has already reached the $29,000 mark. Read more

His Name in Lights: Chicagoans are often treated to a special message in lights, thanks to the work of Chris Gillott, an electrician who worked at the Blue Cross Blue Shield Tower. The building’s south side is unobscured by other structures, so it’s a great place to send a message via lighted windows. Gillott himself pioneered the technique back in 1999, when beloved Chicago Bears running back Walter Payton died and Gillott emblazoned the side of the building with his number, 34. This year, when Gillott died, his coworkers got together to send him a very special message of thanks. Read more 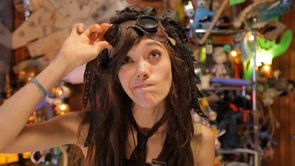 The Zina Lahr Love Bomb: Zina Lahr was an artist, but that short word doesn’t quite describe the explosion of creative energy that’s evident when you watch her display and describe her work. A friend shot some video of Lahr and her creations for a portfolio project, and just a few months later, Lahr died in a hiking accident. The video footage was worked into a short video that has gotten a phenomenal response and generated attention for the arts scholarship fund started in Lahr’s honor. Read more

was battling a brain tumor – one that she was not destined to beat. But before Wise died, the music-loving teen had a chance to visit a recording studio and produce her own version of Katy Perry’s inspiring hit song, “Roar.” So lovely was Wise’s song that it attracted attention from all over the Internet, including Perry herself, who sent Wise an encouraging video message. As a result of the attention, the Liv Wise Fund, raising money for brain tumor research, has smashed its original goal of $150,000 and is now well on its way to a new goal of a quarter of a million dollars. Read more

Heroing Up: As 12-year-old Zachi Telesha

battled bone cancer, he created superheroes who inspired him. His 32-page comic book, Hero Up!, was published before his death earlier this year, thanks to help from his school and publisher Rodale Inc., with proceeds supporting the cancer-support nonprofit Angel 34. And Telesha’s comic book isn’t the only heroic legacy he left. Before his death, Telesha told his parents that he wanted them to host a superhero party for his birthday each year, even after he’s gone, and invite children who are fighting cancer. The first party, held this past October, was a big success, right down to the 100 hand-sewn hero capes for the partygoers. Read more.

a Royal Air Force veteran of World War II, died in November and left no survivors. It seemed his memorial service would be a small and unmemorable one… until his death notice in the local newspaper attracted widespread attention. The notice read in part, “Any service personnel who can attend his funeral service would be appreciated.” Perhaps only a few additional attendees were expected, but what actually happened was that service members and veterans came from all over to turn the funeral into a standing-room-only affair. Read more.

The 18-year-old songwriter was battling a rare form of bone cancer when he found that he could best express his farewell to friends and family through songs. The video he recorded for his song “Clouds” became an Internet sensation and a top-seller on iTunes. In Sobiech’s memory, his family has donated the proceeds from the song’s sales – more than half a million dollars so far – to the Children’s Cancer Research Fund. Sobiech’s memory was honored even further with an amazing outpouring of music in December, when a 5,000-person flash mob sang “Clouds” at the Mall of America. Read more.

Painting His Memory: High school art teacher Lew Hubbard left a mark on his students as indelible as any oil paint. After his death at 58 over the summer, one of his students found a way to remember him and pay tribute to an educator who inspired and encouraged her. The video of Maddy speed-painting her teacher’s likeness at the Fremd High School Variety Show is surprisingly emotional and touching. Watch the video.

didn’t despair when cancer treatments took away her hair. Instead, she learned some spectacular makeup techniques and declared, “makeup is my wig.” When she took her skills to YouTube and began providing makeup tutorials, word quickly spread of the young girl with the great talent, and her subscribers soon numbered more than a million. An appearance on Ellen helped build her reputation. After Castellano lost her battle with cancer, friends and family began collecting donations for her charity of choice, BASE Camp Children’s Cancer Foundation. Read more.