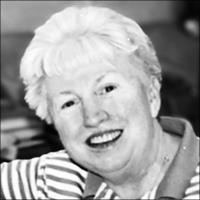 COLE, Augusta T. "Terry" (Sharkey) Of Sharon, January 31, 2021, age 88. Beloved wife of the late Albert J. "Butch" Cole. Daughter of the late Thomas J. Sharkey and his wife Catherine (Amsler) both of Dorchester. Loving mother to Kevin A. Cole and his wife Lauren of Sherborn. Cherished grandmother of William and Natalie. Sister of the late Thomas F. Sharkey and his wife Anne of Concord, CA. Sister-in-Law of the late Henry W. Cole and his deceased wife Judith of Centerville. Terry also leaves behind many nieces and nephews she loved dearly. Terry was always a generous shining light to all who knew her. Upon graduating in the class of 1951 from Cathedral High School, she passed up an offer from her parents to pay for college so that her younger brother (and personal hero), Tom, could attend and graduate from Boston College. Instead, she applied her clerical skills to a career with General Electric at their Westwood offices from 1952 until 1974. During that time, Terry met her husband Butch at Moseley's on the Charles in 1964. They were married shortly thereafter on September 23, 1966 in a ceremony at St. Peter's Church in Dorchester. Together they lived briefly in Canton and moved back to Butch's hometown of Sharon in 1968. Not being able to have children on their own, they adopted their son Kevin through Catholic Charities in 1974 and provided a warm and loving home for him. Returning to work in 1982, she followed her true calling, caring for young children. Terry was known as a second mother to many of Sharon's preschoolers through her tenure at Sharon Country Day School as the extended day teacher, retiring in 2000. Terry enjoyed her retirement and cared for Butch and her cat, Logan, in Sharon before moving into the Village at Willow Crossing, Mansfield in 2013, residing there until her passing. While at the Village, she made lots of new friends and was lovingly cared for by the fabulous staff that has become part of her extended family. While it's heartbreaking to lose her, it is comforting to know she lived a good life and was loved by all who had the pleasure of knowing her, especially her grandchildren whom she adored. Relatives and friends are kindly invited to attend Terry's Life Celebration on Friday, February 5, 2021 from 4PM until 7PM in the James H. Delaney & Son Funeral Home, 48 Common Street, WALPOLE. As a result of the ongoing and ever developing health crisis in the world and with genuine concern for the people whom they love, Terry's family has decided that her Funeral Mass will be private, with Interment taking place in Rock Ridge Cemetery in Sharon. In lieu of flowers, memorial donations in Terry's name may be made to The American Lung Association at www.Lung.org Delaney Funeral Home www.delaneyfuneral.com

My thoughts and prayers are with your all. May many wonderful memories and thinking of Terry’s wonderful laugh and bright smile give you comfort.

My thoughts and prayers are with your all. May many wonderful memories and Terry’s smile give you comfort.

Kevin you are a great guy, But you have always been and even better son . And that is a direct result of an amazing Mom.
So sorry to hear the news. My thoughts and prayers are with the Cole family.

My condolences to the Cole Family. In 1964 my family moved to Robin Road in Sharon. Butch Cole was our letter carrier. He was an avid landscaper and became the neighborhood landscaper. He always took the time to teach me about landscaping. At this time he met Terry. She would come with him as he performed his " magic" on the Robin Road lawns. She was always kind, always had a smile and always friendly.

Never miss an update about AUGUSTA. Sign up today.