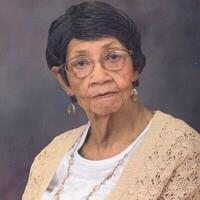 On the evening of Thursday, November 11, 2021, the Lord called home his faithful servant, Aaron Freeman.

Aaron was born on February 20, 1920, to Johnnie Harris and Johnnie Bob Lathon in Saltillo, MS.

On October 21, 1939, Aaron married her beloved husband Clyde “Jim” Freeman.  They had been married for 73 years when he was called home in November 2012.  In the early forties, they moved from Tupelo, MS to Murphysboro, IL. After spending many years in Murphysboro, they moved to Chicago, IL and then on to Gary, IN before moving back to Murphysboro.

When Aaron returned to Murphysboro, she became a member of Morning Star Missionary Baptist Church.  Aaron was a housekeeper for many years working at St. Joseph Hospital and for several residents and businesses in Murphysboro.

In Aaron’s earlier years, many knew her for her spunky and witty spirit.  She did not bite her tongue and would tell you like it is.  That is truly what everyone loved about her.

Aaron’s husband, parents and her three sisters, Ethel, Martha and Emma Lou preceded her in death.

Too Rosemary and family you have my deepest condolences I work with rose I remember how she spoke so much love of her parents I pray that God give you strength too get threw this journey. The Selph family.

At this time of loss you are in our thoughts and prayers. May trust in God and special memories of Ms Aaron comfort and warm hearts from Debbie and Gordon Oneal and family with love and friendship