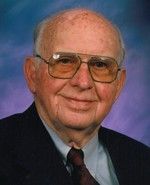 Memorial services will be held at 10:00 am on Saturday, February 13, 2010 in the Delhomme Chapel of the Flowers for Aaron Hodge Griffin, 92, who passed away on February 10, 2010 at Lafayette General Medical Center. Reverend John Walmsley, Pastor of Grace Presbyterian Church, will conduct the Memorial service. Mr. Griffin, a resident of Lafayette, LA, was the son of the late Hodge Griffin and the former Eleanor Farley both of Henderson County, Kentucky. Aaron was retired from Texas Gas Transmission Corporation. He is survived by one daughter, Beverly G. Shea and her husband, Jerry Shea, Jr.; one son, Tom Griffin and his wife, Linda; grandchildren, Griffin Shea, Patrick Shea, Thomas Griffin and Elizabeth Whitman; great grandchildren, Alex Shea, Adam Whitman, Scott Whitman and Mae Whitman; two sisters, Margaret Emerick and Eleanor Koon Hyatt . He was preceded in death by his parents; his first wife, Dorothy Word Griffin and second wife, Elaine Malin Griffin. The family requests that visiting hours be observed on Saturday, February 13, 2010 from 9:00 am until time of service at Delhomme Funeral Home of Lafayette. Memorial contributions can be made in the name of Mr. Griffin to your charity of choice. Personal condolences may be sent to the Griffin family at www.delhommefuneralhome.com. Delhomme Funeral Home, 1011 Bertrand Drive, Lafayette, is in charge of funeral arrangements.

Dear Beverly, I am so sorry to hear about the passing of your beloved dad. Please know our prayers are with you and your family at this time.