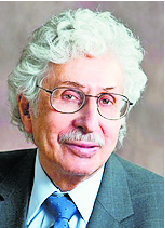 Aaron J. Newman
Aaron J. Newman, 88, of Nazareth, Pa., passed away on Nov. 1, 2019, of cardiac arrest.
His careers and interests included designing amplifiers, running a company that made musical-instrument accessories, selling insurance, flying planes and collecting vintage cars.
Born Jan. 30, 1931, in Brooklyn, N.Y., he was the son of the late Harry Newman and Lillian (Rabinowitz) Newman. He married Helen (Cohen) Newman in 1949. On Oct. 12 they had celebrated their 70th wedding anniversary with family and friends.
Surviving are Helen, sons, Michael Newman and wife, Laura Oltman; Andy Newman and wife, Fran Pado, and granddaughter, Violet Newman; and David Newman and wife, Ilana Storace.
Aaron's dates with Helen before their marriage at age 18 included subway rides to Manhattan to see Broadway musicals, Gilbert and Sullivan, and concerts at Carnegie Hall, helping develop the keen and critical ear that led him toward a career combining his loves of music and electronics.
He studied electrical engineering at Brooklyn Technical High School, Brooklyn College, and RCA Institute and became an innovator in the field. After testing equipment at the Brooklyn Navy Yard and co-founding a hi-fi store, Brooklyn Hi-Fi, in the early days of stereo recording, he designed home stereo equipment for Lafayette radio.
In the 1960s, he became chief amplifier designer for Guild Guitars and moved to Delaware Township. In the 1970s, he co-founded Musitronics, in Rosemont, NJ, which marketed the first electronic wah-wah pedal, the MuTron, and many other effects still sought after by musicians and collectors. After Musitronics, he ran a company that made a device that "bowed" the strings of a guitar with rotating rubber wheels, called the Gizmo.
The devices were used by musicians like Stevie Wonder, the Grateful Dead, Led Zeppelin, ELO, George Benson, and Blood, Sweat & Tears, and can be heard on countless top-selling albums.
After surviving a massive heart attack at age 49, Aaron shifted gears and spent the next four decades as a health and life insurance agent. Under the Affordable Care Act, he volunteered to help people in need navigate the intricacies of the insurance marketplace.
He was a fierce champion of equality and human rights, unwilling to accept anything less than honesty, integrity, and deep respect for all.
Aaron's passion for mechanics led to lifelong hobbies collecting, restoring, and showing antique cars and planes. He and Helen got their pilot's licenses in the 1950s; they flew together for as long as their health allowed. His most cherished possession was an AN-2, a huge, lumbering Soviet-produced utility biplane. Aaron was an active member of the NEPA Section of the Mercedes Club and the Antique Automobile Club of America.
All who knew Aaron reveled in his enthusiasm for finely crafted and executed musical composition and performance and beautifully made things.
Services will be held privately through Bartholomew-Schisler Funeral Home in Nazareth.
A celebration of Aaron's life will be held at the Flemington Woman's Club in Flemington, NJ, on Saturday, Nov. 16 at 12 noon.
Memorial contributions may be made to Raritan River Music: raritanrivermusic.org/donate.
Online condolences may be left at schislerfuneralhomes.com.

We always enjoyed seeing you and Aaron at our June Jamboree and other Mercedes events. We have fond memories of a lovely gentleman. He will be missed.

Aaron, you will be missed. It was our pleasure knowing you and your beautiful wife of 70 years, Helen. Our prayers to her and your family. God Bless

I'm so sorry for your loss. He was a great man, even though our time knowing eachother was too short

I was saddened to learn Aaron has left us.

He was always so willing to help me and I am forever grateful to have known him.