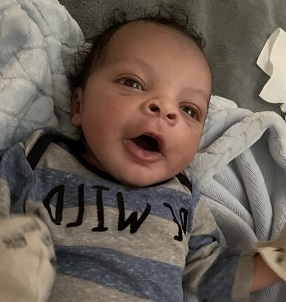 Not the right person? See All ›
LOCATION
Davenport, Iowa

BETTENDORF-Funeral services for Aaryis D. Henderson, Jr, one month son of Ryan Goodlet, Bettendorf, and Aaryis Henderson, Sr, Moline, will be 11am Saturday, February 15, 2020 at the Halligan-McCabe-DeVries Funeral Home, downtown Davenport. Visitation will be from 10am until time of service at the funeral home. Memorials may be made to the family.

Aaryis Dmarlo Henderson, Jr, was born January 9, 2020 in Bettendorf and passed away on Saturday, February 8, 2020 at Unity Point Trinity, Moline.

Although his time on earth was short, he was a breath of fresh air and was loved by all who knew him.

He was preceded in death by great grandmother Daphine Brown.

Online remembrances and condolences may be expressed to the family by visiting Aaryis's obituary at www.hmdfuneralhome.com.

Never miss an update about Aaryis. Sign up today.