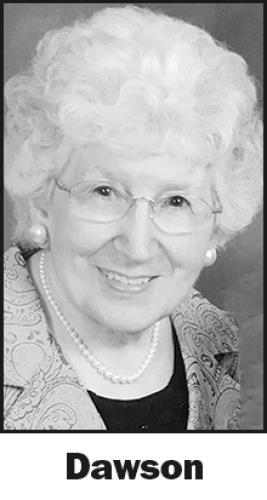 Not the right person? See All ›
LOCATION
Monroeville, Indiana

AGNES M. DAWSON, 97, passed away on Tuesday, Nov. 10, 2020, at Parkview Regional Medical Center, Fort Wayne, after being admitted a week earlier. Born June 10, 1923, in Monroe ville, Ind., she was a daughter of the late Lawrence A. Schall and Christina W. (Linder) Schall. Agnes was united in marriage to Donald H. Dawson on Sept. 12, 1945 at St. Rose Catholic Church; he preceded her in death on Jan. 12, 2013. She was a graduate of St. Joseph Catholic Grade School and Monroeville High School. She was a lifelong member of St. Rose Catholic Church in Monroeville. She also helped with the Rosary Sodality at church. Agnes was employed at General Electric in Fort Wayne until she met the love of her life, Donald Dawson, whom she eventually married. Following their marriage, she became a devoted homemaker and was dedicated to her family. Survivors include her daughter, Rose M. (Jerry L.) Jacobs of Monroeville, Ind.; sons, Michael A. (Nancy) Dawson of Grabill, Ind., Lawrence E. Dawson of Monroeville, Ind., and Patrick G. (Marge) Dawson of Fort Wayne; daughter, Therese A. (James) Altman of Monroeville, Ind.; brothers, Theodore "Ted" (Sue) Schall of Fort Wayne and Henry "Jack" Schall Fort Wayne; six grandchildren, Andrew Jacobs, Tony Jacobs, Trevor Dawson, Evan Dawson, Elisa Roehm, and Kevin Altman; and nine great-grandchildren, Madalyn and Jack Jacobs, Sophia and Triton Dawson, Isaac, Kate, and Owen Dawson, Ryker and Gemma Roehm. She was preceded in death by a son, Tommy Dawson (age 7); sister, Helen Schall; an infant brother, Leo Schall; other brothers, Tony, Joe and Paul Schall; and other sisters, Delores Kleber, Theresa Lerch, Mary Jacquay and Sister Celestine Schall. Due to the COVID-19 Pandemic and family wishes, family services will be private. A Mass of Christian Burial will be held at St. Rose Catholic Church in Monroeville with burial in the church cemetery. Preferred memorials are to the church for Masses or to the St. Rose Catholic School in Monroeville. Arrangements by Zwick & Jahn Funeral Home, Jacobs Chapel, in Monroeville, Ind.

My deepest sympathies for the family..I loved her she was always smiling and sweet

Nancy and Mike,
So sorry for your loss, Barney

I am so sorry for your loss. Aggie & Doc were friends of my parents who lived in Woodburn, In., Bob & Jessie Stauffer.

Never miss an update about AGNES. Sign up today.