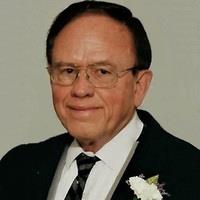 After graduating from Wichita Falls High School (Texas), Alan attended Texas A&M University, where in 1953 he attained a degree in electrical and mechanical engineering. He proudly served as a 1st Lieutenant in the United States Army following the Korean Conflict, earning the Korean Service Medal, UN Service Medal, and National Defense Service Medal.

After his service in the Army, he embarked on a long career with Westinghouse Electric Corporation, working at several locations before settling in Buffalo, N.Y. Alan retired with his family to Roanoke in 1987.

A lifetime flying enthusiast, Alan even piloted his own plane in his younger years. In later life he enjoyed spending quality time with his grandsons and playing golf. Service to his family was of utmost importance to Alan.

Alan is survived by his loving wife of 47 years, Gertrud Maria Brummer Black; his daughter, Allegra Black and her husband, B. Webb King; two grandsons, Benjamin and Ethan King; a sister, Mary Schlagenhauf; a brother, William Black; and several cherished nieces, nephews and other extended family.

I was so sorry to hear about the loss of your beloved husband. You were so dedicated to him during the time he was at Carrington. I always enjoyed talking with you & him when I spent time with my Dad, Zollie Perdue. May God comfort you and your family during this time of sorrow. God Bless you.
Becky Lierman

I am terribly sorry for your loss. May your memories and the comfort of knowing hes in a better place ease your pain.

Mrs Black so sorry for your loss. Thank you so much for coming in Zollie Perdues room and singing he loved that you are such a Loyal lady you were there every day taking care of your husband . Bless you and your family Gorden & Bonnie Perdue

Allegra - I am so sorry to learn of your Dads passing and regret that I am out of town and cannot attend the memorial service. Please try to take comfort in the love of your family, the embrace of your friends and the strength of your faith. Ellen and I are thinking of you, your Mom, Webb and the boys.

Allegra, my sympathies to you and your family and your Mom. I hope that your wonderful memories of your father will help to heal the hole in your heart.
Jennie Waering

He led a good life. He had immense pride in his daughter, Allegra. He treasured his family.

I was lucky enough to be Alan's cna at the glebe and at carrington . I adored his sense of humor and I loved his wife. They are very special to me. Alan was my buddy and I never left his room not laughing. Prayers to the family during this tough time. -heather murrell

Rest In Peace, Mr. Black. You will be missed by many.