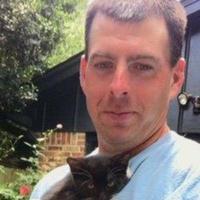 Not the right person? See All ›
DIED
December 23, 2019
AGE
46
LOCATION
Tyler, Texas
CHARITY
The Charity of your Choice
Make a donation

Preceded in death by his father, Douglas G. Harris, his grandparents, Roy G. and Sally L. Harris, and John L. Wills and Eunice Drennan.  Alan is survived by his loving mother, Linda Kay Wills Harris and special “other “parents, Randy and Stephenie Roberts. Alan will be greatly missed by his many friends and clients, and most especially by his dog, McKenzie and his cat, Bandit.

Alan owned and operated Alan’s Lawn Care and Landscape for over 30 years while continuing to be involved in the family business, Harris Finance and Furniture. Loving the outdoors, Alan was most at home driving his tractor at his farm or helping his many clients care for their lawns and implement landscaping ideas and details.

Additionally, Alan was raised attending Colonial Hills Baptist Church where he was a member.   Alan was described as a “giant of a man, but gentle as a kitten”. We shall miss you.

Linda we are in such shock just having learned of Alan's passing today. We are so sorry and that we didn't know. We loved Alan like one of our own. He was always such a pleasure to be around and was so courteous. He will be truly missed. If we can do anything please let us know.. we lost Charles as well. Linda and Lisa Olson

My deepest sympathies.May the God of all comfort strengthen the entire family during this time of sorrow. Always remember that God keeps in his memory those whom we lose because they are precious in his eyes (Psalms 116:15)

Im so sorry to hear the news of Alans passing. He was such a sweet soul. He truly held a special place in Mom and Daddys hearts. I will be praying for peace and comfort for you in the days and months ahead.

Dearest Linda,
We have just received the news about Alan, we are shocked to hear this, so very sadden. What a tremendous loss, such a beautiful person, such a loving heart, such a devoted son, my heart breaks for you! And so very sorry that we were not there for you, we just didn't know. May God wrap his loving arms around you and give you comfort in knowing that Alan is now with his saving Lord! sincerely, love Sharon and David

Linda,
We are so deeply saddened by the passing of Alan. He was always hard working and such a joy to be around. Our heart is with you as we know we know the sorrow of losing a son. May God comfort your heart and soul.

Alan was a great man and mentor. He will be missed. May Jesus comfort you in these days ahead.

Alan was a good friend. I remember when my first son was born he was just as excited as I was. He hand made my son his first toy box. Alan always was into building weird and dangerous toys. One time he built a axle for a gocart contraption out of a dumbell bar he got from TJC. Alan will be missed.