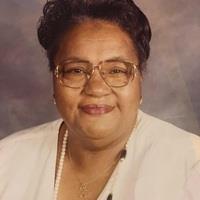 Alfreda, affectionately known as “Monkey” was born on November 13, 1938 in Dinwiddie County to Pauline Pegram and Leroy Hanson.  She was a member of Metropolitan Baptist Church in Petersburg, VA.  She served in several church ministries to include: the senior citizens, missionary, nurses and hospitality ministries.

She was employed at Walnut Hill Convalescent Center as a nurse.  Her favorite pastime was cooking and softball.  She was also known as one of the mothers of the 5th Ward Community.

May your love one Rest In Peace and your hearts healed with the love you shared for her and the beautiful memories that will bring you comfort. God’s spirit will be with you during this time and carry you through.

To the family of the late Alfreda Hill, I offer my condolences, in the loss of your Mother. May God bless each one of you. My love to the family. Ms.Lorraine Coard Randall.

Sending our condolences and prayers to the Hill family.❤ Smook, Jennifer, Sho-Don

I've lived next door to the Hill family for over 30 yrs. I couldn't wish for better neighbors Ms Hill treated me and my family like her own and never batted an eye during crazy times and family drama. Lord knows she has seen and been through it all and now she has gone home and is in God's hands. My condolences to all of her children and family. I know it's hard but she is with her Lord.

Mama Hill spirit was very approachable...loved to talk to her after church...Mama angel will be missed...sis B. Johnson

I was so sorry to hear about your mom. Weeping may endure for a night but joy comes in the morning. Praying for and with you.

I will truly miss you Mrs. Hill. I love you and thank you for making me a part of your family.
Have a slice of heavenly lemon cake for me.

Grief can be so hard, but our special memories help us cope. Remembering you and your loved one today and always. Our prayers are with you all. Much love!

Dear family sending my deepest condolences praying for your found comfort in our saviors loving arms, asking you to remember the promises of The Lord our God. Do not fear, for I am with you; Do not anxiously look about you, for I am your God. I will strengthen you, surely I will help you, Surely I will uphold you with My righteous right hand. For, Blessed be the God and Father of our Lord Jesus Christ, the Father of mercies and God of all comfort, who comforts us in all our affliction so that...

Never miss an update about Alfreda. Sign up today.