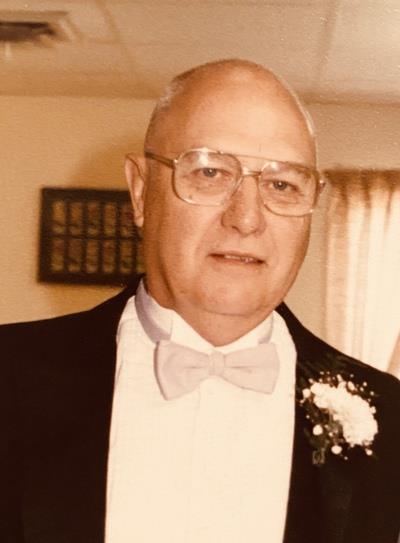 Amos Rudolph Martin passed away on Thursday January 23, 2020, at Riverside Regional Hospital. He was born on June 3, 1922, and raised by John and Sara Martin in Radford, Va. He served in the military and supported the Manhattan Project during WWII in support of the production of the Atomic Bomb. He ultimately retired from Newport News Shipbuilding as a crane operator in the foundry department.

Mr. Martin was preceded in death by his wife, Gladys P. Martin, and by his parents and brother, Maynard Martin.

He is survived by his daughter, Lisa, and her husband, Alan Dale Harvey, of Yorktown, and his son, Wendell R. Martin and his wife, Clara "Tip," of Woolwine, Va. He will be missed by his Grandchildren, Jennifer D. Harvey, Andrew M .Harvey, Michael C. Martin, Adam W. Martin, and Wendy Martin Watts. His Great Grandchildren Jesse A. Martin, Cory E. Martin, Clinton J. Yarboro, Adrianne M. Matthews and Alyssa M. George. And finally, the Great Great Grandfather of Malach G. Matthews and Jaxson J. Yarboro. Who gets to have five generations these days?

He is also survived by life-long close friends, Dennis and Janice Griffin of Eden, NC.

A funeral service will be held at 2:00 p.m. on Sunday, January 26, 2020, at Andrews Funeral Home & Crematory, Gloucester, VA. Interment will be at Bellamy Memorial Cemetery. Visitation will be at 1:00 pm before the service. Memorial contributions can be made to Peninsula Rescue Mission, P.O. Box 3777, Newport News, VA 23607.

Lisa,
Grief can be so hard, but our special memories help us cope. Remembering you and your loved one today and always.

Remember you from living in Wicomico and we rode the same bus. You were a year older than I was. GHS '83

Jay and I just heard about the passing of your father. It sounds as if he led a very full life and he leaves you with a legacy of fond memories of times together. Our prayers are with you all and your entire family.

Lisa and Dale, we are so sorry to hear that Amos has departed from us. He was quite the man. He had lots of energy and always out and about. I loved to see his "new" cars almost on a weekly basis. He had the knack for making a deal. He will be sorely missed!!

Lisa and Dale, Im sorry to hear of the passing of your father. Sending our most sincere condolences. You and your family will be in our thoughts and prayers.

Never miss an update about Amos. Sign up today.