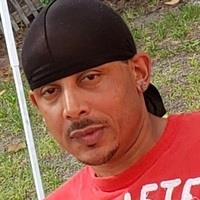 God’s purpose and Divine Will was manifested  in our family and in our lives as He peacefully proclaimed the spirit of our beloved son, father, grandfather, brother, grandson, uncle, nephew, cousin, and dear friend, Mr. Andre Lindell West, from this life to eternal life on Tuesday, July 28, 2020, in Blackstone, VA.

Andre was born on July 30, 1979 in Queens, NY. At the tender age of 2 weeks his mother returned to Chesterfield, Virginia which became his lifetime home. Andre was baptized at an early age at Bethesda Baptist Church, Colonial Heights, VA where he was a member of the children’s choir.

He received his education in the Chesterfield County Public School System and was a 1997 graduate of Lloyd C. Bird High School.

As a young boy and into his preteens, Andre spent a lot of time with his Aunt Emily and Uncle Michael. He accompanied them to many car shows and races.  Andre loved detailing cars and would have them looking as if they just came off the showroom floor.  Some of his hobbies included working out, cooking, watching football and listening to all genres of music.  Andre was infamous for wearing his du-rag.  He loved the Lord and was used by God to lead others to the saving knowledge of Jesus Christ.

The Celebration of Life service will be held 11:00 A.M., Tuesday, August 4, 2020 at Journey Christian Church, 3700 Price Club Boulevard, Midlothian, VA 23112. The church is set-up to allow for social distancing however masks are required.

Sending the family so many prayers, and thinking of all of you. We love you so much Andre. Watch over our babygirl from Heaven. We miss you so very much. Until we meet again. We love you, Andre. Rest in Peace❤

Sincere condolences to our family on the loss of Andre. Praying for you all and we all love you. Floyd, Yinestra, Nanette, and Marci

I know you are in heaven so do me a favor and give Sarah kiss on the forehead I kiss my baby for me let them know I'm okay on Earth. Heaven got their number one draft pick and doing time a heaven Hall of famer you will live through me love you bro

My heart is sad. We were childhood friends and had so much fun playing together on the block. May this family find peace and comfort during this difficult time. My thoughts and prayers are with you.

Kelly, I am so sorry for your loss. My thoughts and prayers are with you and your family.

I am so disheartened that I couldn't be there physically at Andre's homegoing service. However, I was able view the live stream. Andre was loved and will continue to be in everyone's heart. Rest in heaven, Andre!
Love you,

Never miss an update about Andre. Sign up today.