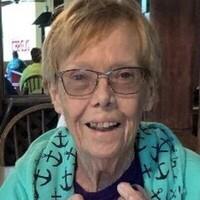 Andrea (Cheryle) (nee Tomb) Davis, 85 years old, formerly of Elyria, Ohio passed away at her home in Hilton Head, South Carolina on Friday, January 22, 2021 where she made her home since 2017.

Andrea was born in Mansfield, Ohio on May 22, 1935 and was a graduate of St. Mary of the Springs Academy and Ohio Dominican University both in Columbus, Ohio.  She was employed as a teacher in the Elyria City School System, retiring in 1996. A member of St. Jude Church she was involved in the Altar and Rosary Society and the St. Jude Bereavement Committee. She also belonged to the American Association of University Women.  Andrea was an avid bridge player, she loved sports, especially Ohio State, and was totally devoted to her family.

She was preceded in death by her husband, Donald Lawrence Davis in 2008; and her parents, Andrew C. and Bernadette (nee Clark) Tomb.

A private family funeral service will be on Friday, January 29, 2021 at the Reichlin Roberts Funeral Home, 327 Cleveland Street, Elyria, Ohio at 9:00 A.M.  until the time of services at 9:30 A.M. with the Reverend Father Joseph Scalco, C.S.J. Pastor of St. Jude Church officiating.

To sign the guest book or to leave an online condolence for the family go to www.reichlinroberts.com

May your memories comfort you. Take care and God Bless.

I remember Cheryle as a gracious hostess on the occasions where Lauren and I stayed over when we were in the area to see concerts. Cheryle made me laugh, and she made me feel very welcome in her home. Those are memories I'll not forget. I know she will be missed deeply by her friends and family.

So sorry for your loss. My thoughts and prayers are with you all

Lauren, so sorry for your loss. You and your mom were quite the team. She will be dearly missed.

It is so very hard to say goodbye to my dear friend Cheryle. We shared many years of good times and laughter. May God bless you Lauren, Don and Stephen, and your families and ease your sorrow.

My condolences to the family of Cheryle Davis. I was saddened to hear about her death. We spent a lot of time together playing bridge. We also had fun weeks at Holden Beach each September playing twenty-four hands of bridge each night. She was a special friend and will be missed. Fondly, Barb Shelar

Lauren, I have fond memories of your mom. Your mom was always welcoming. She loved to see us girls together. I remember watching movies at your house and then spending the night. She made our sleep overs fun - plenty of food, and sometimes she would join us for a little while. I am so very sorry for your loss. It is hard to see all our loved ones get old. My thoughts always go to when our parents were younger and all the good times. Try and remember the fun times with family and friends. It...

Never miss an update about Andrea. Sign up today.