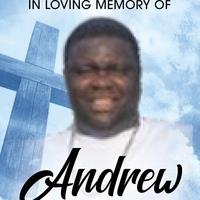 Andrew Wallace 44, was born January 23, 1977 in Springfield, IL the son of Diane Wallace and Gilbert Stuwart.

Andrew Wallace was raised in Minneapolis, Minnesota where he attended Field Elementary School and Harrison Alternative School. Andrew achieved his G.E.D from the State of Minnesota. He continued on furthering his education in completing three degrees in college receiving his ordained minister licenses, Doctor of Motivation, as well as, Doctor of Divinity. A host of certificates of completion of skills in Leadership. Andrew was known by many people. He made his presence well known.

Andrew was a man that had his own style and was known to show off his creative fashion. Andrew was a humble man with a kind heart that looked after other more than his self. He enjoyed the company of others and being the life of the party. Andrew could not wait to tell a joke and get a story out of anyone. Andrew was very close to his family, where they all had a special bond.

On November 11, 2021 Andrew Wallace departed his life on earth at Regions Hospital at 9:35am after hospitalized for several days in St. Paul MN.

May the peace of GOD fill the void in your hearts for the loss of your loved one.