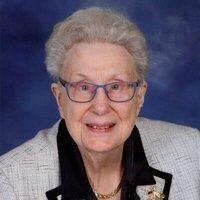 The Broadcast will remain available for viewing on this website until October 20, 2020.

Anne Catherine (Gaston) Newton, 88 of St. Joseph, died Friday, July 19, 2020. Anne was born September 6, 1931, in Topeka, Kansas to Glenn Ernest Gaston and Catherine (Griffith) Gaston. Anne was very proud of her grandfather, Charles Griffith, who was the Attorney General of Kansas for many year and was running for governor of the state when he unexpectedly passed away.

Anne received her B.S. Degree in Education from Southeast Missouri State College in 1953. She married Jack Russell Newton on March 7, 1953. They have three sons, James, Robert and David; three granddaughters, Kristy, Misty and Tabbatha; and nine great-grandchildren. She and her husband Jack, were teachers together in five school districts. During this time, she coached softball, basketball and volleyball. Her teams won many championships. She was a teacher for  the school districts in Hurculaneum, Missouri; Lake Mills, Iowa; Elkton-Pigeon-Bayport, Michigan; Rogers City, Michigan and Bridgeport, Michigan.

Anne loved all sports. She was especially good as a goalie for field hockey, as no one ever scored on her as the goalie; neither in high school or college. In addition, she played softball, basketball and volleyball in high school and college.

Anne was very well liked by everyone who knew her. When she was a senior at the Richmond Heights-Maplewood High School, she was voted Most Well-Liked Girl in school. Anne was the main organizer of the Teachers Association of the Elkton-Pigeon-Bay Port school system. She was a leader in allowing women to wear pants while teaching school in Lakers High School. She was the president of the Women's Golf Club of the Bridgeport Country Club in Michigan and demanded that the women have the right to play golf on Saturday, the same as men.

Anne's husband was a School Administrator for 29 years, and during that time period, and in three different school districts, he believed he evaluated well over a thousand teachers. He felt that his wife Anne was by far the best teacher he ever evaluated. He was always very proud of Anne as a wife, mother, a teacher and most important of all he was proud of the fact that she was a true Christian that actually walked the Christian walk. Anne will be very much missed by many people as well as family members.

Anne loved her birth family very much. They include, her brother Gary Gaston and his wife Doris; her sisters,  Mary Whitten and her husband Jerry and Ginny Jarrell and her husband Mike. Anne spent a lot of time with her three granddaughters, Kristy, Misty and Tabbatha. She helped them with all their sports and music. During the time these girls visited her home, she took them shopping for school items and fall clothing. Anne always looked forward to their visits as she loved them all so very much!

Visitation will be Thursday, July 23, 2020, beginning at 6:00 p.m. with services to follow at 7:00 p.m. at Heaton-Bowman-Smith & Sidenfaden Chapel. Private interment services at Leavenworth National Cemetery will be at a later date.

Memorial contributions may be made to Gideon's International on cards provided at Heaton-Bowman-Smith & Sidenfaden Chapel.

I am very sad to hear of Mrs. Newton's passing. I first met her when she joined the St. Joseph Chapter of D.A.R. When I was Chapter Regent, Mrs. Newton was very friendly and enthusiastic about helping on committees. She and her husband were very interesting and nice to talk with. My sincere sympathy to the family.

The time spent as a child with Anne brings good memories of swimming, goofball hunting, and playing games. Although time has gone by, I appreciate what I had as a "grandchild".
Sincere condolences,
Kristie

Anne was always so good to Ginny and me, her little sisters, when we were growing up. I looked up to her and adored her. When she was in college and brought her boyfriend, Jack, to meet the family were all abuzz with excitement and speculation. I embarrassed her right away by asking Jack if he was going to marry our sister. When Anne and Jack had their three boys, Jim, Bob, and David I was thrilled to be their Aunt Mary! Visiting Anne and Jack and the three boys in Michigan was always...

Anne was always so good to Ginny and me, her little sisters, as we were growing up. I looked up to her and adored her. When she was in college and brought her boyfriend, Jack, home to meet the family we were all abuzz with excitement and speculation. I embarrassed her right away by asking Jack, "Are you going to marry our sister?" When Anne and Jack had their three boys, Jim, Bob, and David, I was thrilled to be their auntie. Visiting Anne, Jack, and the boys in Michigan was...

I'm sending my sympathy Anne's family; I remember her so fondly. I had the pleasure of being Anne's daughter-in-law for a time. What a delightful mother-in-law was Anne! Anne always had kind things to say, a positive word of encouragement or compliment, and she had such a great sense of humor. Anne lived life fully, in my memory of her, and she was a devoted wife, mother, grandmother, and a true educator. I think it would have been great to be one of the students she taught years ago;...

Although I did not know you personally, I do remember seeing you at the DAR meetings. RIP Ms. Newton.

I am so saddened to learn of the passing of my cousin, Anne. I have so many memories of spending time with her and Gary as children. Her life' journey was a remarkable one - my heart is overflowing today as I think of the ties that bind.

Never miss an update about Anne. Sign up today.