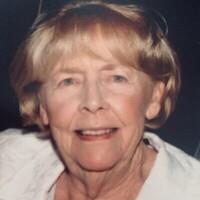 Audrey, the beloved wife of Bob for 67 years is survived by her two daughters, Charlene Wilhelm (Don),
Audrey Geoffroy (Dan) and preceded in death by her son Robert H. Dunn, Jr. (Nancy). Audrey was a
proud grandmother to eight; Brendan and Sean Brulon, Robert III and Kelly Dunn, and Nicole, Daniel,
Alanna, and Garrison Geoffroy.

Audrey was a dedicated Army wife and mother keeping her family in high spirits during two family
separating wars and through eighteen military relocations. She was a gifted artist winning the Virginia
governor’s 1965 annual award for her death mask oil painting of ‘War No More’. Later, Audrey, found
her true knack as a successful retailer, at Bloomingdale’s in McLean, Virginia where she was rapidly
promoted to the executive level. Family and friends affectionately called her Madame Blum Blum.
In retirement, Audrey and Bob enjoyed the pleasures from Fripp Island to Hilton Head for 37 years and
developed many meaningful friendships.

In lieu of flowers, please make donations to Tidewater Hospice, 10 Buckingham Plantation Drive,
Bluffton, SC 29910. The family would especially like to thank Loving Arms Health Nursing for all the
support and care of mother at home. Funeral arrangements by Keith Funeral Home.

Never miss an update about Audrey. Sign up today.