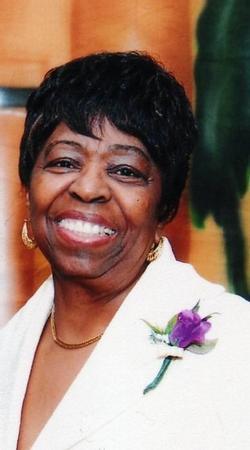 The lovely Audrey Mae Guidery West was born February 2, 1939 in Convent, Louisiana to the late Reverend Lester and Mary Guidery. She was the oldest of 3 children. Early in her childhood she and the family moved to New Orleans.

They united with the First Evangelist Missionary Baptist Church under the leadership of the late Rev Dr. J. L. Spears. On Mother's Day 1948, Audrey experienced her most sacred childhood memory at this church. She recounted this day as being one of her proudest moments, as she was one of the few that decided to accept the Lord Jesus Christ as Savior and be baptized.

She was a charter member of First House of Prayer Baptist Church, which was organized by her father, the late Rev Lester Guidery, in 1955. She worked tirelessly for the Lord as president of the Baptist Training Union, superintendent of Sunday School, a teacher, musician and choir director. Under her leadership, the children's choir received many invitations to sing throughout the city of New Orleans. Not only was she an active servant of God for her church, but for many congregations: Buena Vista BC, late Rev Walter Landry, Good Shepherd BC, Rev C Shaw and many other churches that needed a willing worker for Christ. She was also a member of Women's Ministry of the Louisiana Freedmans General Educational District Association.

Audrey always had a love for learning. She graduated with honors from McDonogh #35 Sr. High School and went on to receive a certificate in Business from Strait Business College. She later studied at Dillard University, but because of life's trials, she placed her education on hold and started working. She worked for the New Orleans Parish Schools, George Washington Carver Elementary and LB Landry High School. Not completely satisfied and believing "I can do all things through Christ that strengthen me" (Philippians 4:13), she returned to school while working and received her Bachelor of Science degree in Business Administration from Southern University at New Orleans.

In September 1968, Audrey moved to San Francisco after marrying the love of her life, 1st Sergeant, Lionel West and God blessed this union with 2 beautiful daughters, Terrellynn and Merrillynn.

In San Francisco, the Lord guided her to Pleasant Hill Baptist Church under the leadership of the late Rev E D Singleton where she continued to utilize her musical talents. At this church, the West Family developed a loving life-long friendship with the Smith Family and Williams Family. Audrey later became a member of Little Bethany Missionary Baptist Church in 1977. She served as a teacher, the minister of music, Dean of Christian Education, and a member of the Pastor's Aide Ministry and Mother's Board Ministry.

Audrey was a very active soldier in God's army and firmly believed in Luke 12:48 which states, "For unto whomsoever much is given of him shall be much required." She lived these words, and in 1988 graduated from Golden Gate Baptist Theological Seminary with a certificate in Christian Ministries. She used her knowledge to spread the gospel throughout the United States and other countries. And with each tour of duty she wore the armor of God and continued to witness for Christ with her voice and lifestyle.

Audrey continued using her talents and skills for other Christian organizations and congregations as the musician for the Home & Foreign Mission District Women's Department, a member of the SF Citywide Revival Mass Choir, the Chaplain for the 24th Infantry Regiment Combat National Reunion Convention, and an assistant to the Sisters for Excellence Inc. and Unto the Least of These Ministries.

Audrey M. Guidery West entered into eternal rest on Tuesday, September 16, 2014 at California Pacific Center, San Francisco, CA. Beloved daughter of the late Pastor Lester Guidery and Mary Smith Guidery.The devoted wife of 1st Sergeant Lionel West. Loving mother of Terrellynn (Michael) and Marrillynn. Grandmother of Adam Taylor. Dearly beloved sister of Ann Guidry (Washington, D.C.) and Pastor George Guidery (N.O.LA.). Also survived by a host of nieces, nephews, cousins other relatives and friends.
Relatives and Friends of the family, Pastors, Officers and Members of First House Of Prayer Baptist Church ,all neighboring Churches and Churches where Audrey West ministered as their organist are all invited to attend the Funeral Service on Saturday, October 4, 2014 at 10:00am at First House of Prayer B.C. 2826 LaSalle Street New Orleans, LA at 10:00am. Visitation will begin at 8:30am. Interment in St. Michael Catholic Church Cemetery in Convent, LA.

Audrey was a beautiful, wise, kind-hearted, family centered strong Christian woman who will be greatly missed.
"May the work I've done, speak for me"

Truly our lives are better because of Audrey. GOD allowed Audrey to bless us with her talents, love, and beautiful spirit. She is LOVE!!!! When I remember Audrey, I remember her as a soft spoken petite lady but yet strong, confident, and unrelenting. I remember her as a being a person that always did more; she would always go above and beyond what was expected. She is our living example of Excellence!!!!!

God will give you whatever you need to continue this journey--just ask. ...

You will definitely be missed!!! But your memories will last forever, your beautiful smile will always be in my memory, your nurturing demener!!!!
with deepest sympathy,
the Donald & Myers Family

To the family of Audry Mae: I have fond memories of Audry, as a child coming up in First House of Prayer BC. She always had a beautiful smile and pleasant words to express. May God keep Her family in perfect peace, through this difficult time.
Thoughts and prayers are with you.
Mr.& Mrs. Jeffrey Wilson Sr

Never miss an update about Audrey. Sign up today.