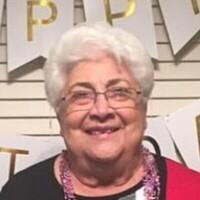 Augusta Field Flanagan, 92, of Slidell, Louisiana, passed away on Sunday, September 6, 2020, in Slidell.

Mrs. Flanagan was born December 15, 1927, in New Orleans, Louisiana, to William and Felicie Field, and was a resident of Slidell since 1957. She was a parishioner of St. Margaret Mary Catholic Church in Slidell.

She was preceded in death by her husband, Gerard Flanagan; and a daughter, Gwen Flanagan; three brothers, James Field, Teddy Field, Billy Field, and one sister, Felicie Borne.

Friends may visit at the funeral home on Friday beginning at 11:00am.

Burial will be in Forest Lawn Cemetery.

I will miss seeing her smiling face at LaPines. She was a pleasure to wait on at the restaurant. Sending prayers for her family.

Thoughts and prayers are with your family. Agusta will be missed'

So sorry for your loss. Prayers for your entire family.

Augusta was one of the first women I worked with in Slidell in 1991 when I first moved to Slidell from Daphne, AL. I'm so sorry to hear of her passing. She was always an amazing woman with a wonderful, loving sense of humor. God bless the many loved ones and friends Augusta has left behind.

Dearest Peggy and family,
I was saddened to read of your mothers passing. We are keeping you and your family in our prayers. May God hold her in the palm of His hand.
Love,
Mike, Dara, Katie & Angelle Zeringue

To Peggy and Family my heartfelt sympathy. My fondest memories are of living in Slidell and having wonderful neighbors like your Mom. She is safely resting in peace now. God's peace and blessing be with you. Rhea Fitzgerald

RIP Augusta, I will always cherish the friendship and memories

In loving memory of a wonderful lady. We will love you and miss you always. But we will never forget you. You were a blessing on earth and now a blessing in Heaven. God Bless You!

Never miss an update about Augusta. Sign up today.