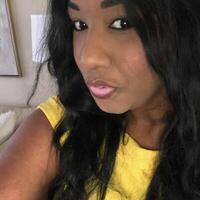 Ayana Shantel Nixon, affectionately known as Pebbles, was born in Philadelphia, Pennsylvania on March 5, 1982, to Derrick and Margaret Nixon. She was born second to Juanita Nixon, a sister she grew to love and adore. Following the passing of her father, her mother worked diligently to take care of her girls while working and putting herself through nursing school. She later met and married Richard Orth and gave birth to Richard Daniel and Alena Denae, giving Ayana two more siblings to love.

As a young child, Ayana was active in the church and dedicated her life to Jesus Christ.  She was fortunate to have attended private Christian school where her relationship with Christ deepened.  Her family relocated to Willow Grove, PA where Ayana graduated from Upper Dublin High School in 2001. She was accepted into the Temple University Fox Business School where she completed her Bachelor’s degree in Human Resources Management in 2005.

Ayana went on to marry Nicholas Moncrief in 2007.  During this time, she successfully progressed in her career, working as a Human Resources professional at University of Pennsylvania Health System. While her career continued to advance, she also received a Master’s degree in Organizational Development and Leadership from The Philadelphia College of Osteopathic Medicine, which she used to teach and consult with senior healthcare leaders, in addition to being a guest lecturer in various conferences and training forums.

After six years, Ayana and Nicholas decided to part ways very amicably as friends in 2013.  At this time Ayana decided to buy a 1998 red BMW Z3 sports car.  It was a stick shift, which she did not know how to drive, but learned how by watching YouTube and with help from friends.

When she was not zipping around with her music blasting and top down, she enjoyed spending time with her niece Isabella Saba, born August 25, 2012. Her niece meant everything to her. Most of her favorite memories are of time spent with her ‘Bella Button’ and her family.

Ayana was blessed to have many cherished friends in her life.  She created strong connections that helped her spirit shine throughout her life.  In her free time, Ayana enjoyed dining in the city, eating delicious food, a good happy hour, listening to live music, watching movies, going to the beach, buying shoes, touring museums in DC, and traveling to Jamaica with her family.

Ayana’s entire world changed following the sickness of her sister Nita.  Her immense love for her sister caused her to fully devote her time and energy to Nita’s care.

Sadly, In June of 2016, Ayana was diagnosed with breast cancer.  She battled this disease with grace, courage and bravery.  Although her fight was difficult, Ayana praised God for the health and safety of her sister Nita.

So sorry for your lost.

Beautiful Ayana, inside and out. We met through her Sister, Nita when we were children. Great memories of childhood sleepovers and eating pizza until we were all full!! As we all got older we lost touch until we were adults. I reconnect with Nita through Facebook, and lo and behold walked right past Ayana's office at my former job. I backed up and knew that gorgeous smile from anywhere. I burst in and she gave me the biggest hug!! That day we agreed to get together, along with Nita. We met up...

I have fond memories of of Ayana. She was beautiful (inside and out), caring and humorous.
May God bless you and your family in this time of sorrow.

Spirit was truly to beautiful for this world. I will miss you so much.

Pebbles,
You were always there for me. From the first time I met you, you were open, warm and welcoming to me. One thing about you is that you never left me out. You did things for me that no one would’ve done for me. You loved me and showed me, You made me smile, you pushed me to do things I would have never done. You motivated me and you showed me how to have fun.

I tried so hard to hold in them tears today because I knew you wouldn’t want me to Cry but as soon as them...

The last time I saw Ayana was about 3 weeks ago when I dropped off her favorite meat empanadas and dipping sauce. I didn't ask her if she wanted them, I knew she wasn't eating much, I just said, "I'm bringing them now!" I didn't know she'd had chemo that day. An hour after I got home she texted me one word, "Delicious!!" It made me so happy to know she had eaten and enjoyed them. She was my #1 fan of my cooking. We enjoyed so many celebrations and holidays together with...

Ayana was not just a coworker but a great friend. She is greatly missed

You hold time within your hands, and see it all, from beginning to end. Please keep and carry these precious people in their sadness and loss. Cover them with your great wings of love, give their weary hearts rest and their minds sound sleep. Lord, lift their eyes so that they may catch a glimpse of eternity, and be comforted by the promise of heaven.
We ask all this in the precious name of Jesus.

Never miss an update about Ayana. Sign up today.