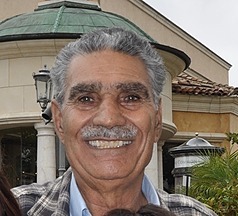 Not the right person? See All ›
This has not been verified by Legacy.com or our partners.
BORN
April 21, 1933
DIED
October 23, 2018
AGE
85
CHARITY
Alzheimer's Association
Make a donation

Azizullah Khajeh-sharaf-abadi was born on April 21, 1933 in the village of Sharaf Abad, 30km away from Yazd, Iran. Aziz passed away at age 85 on October 23, 2018 in Tehran, Iran. Aziz was the beloved husband of Nayereh Sobhani. They had four children together; Nosrat, Manoochehr, Parivash, and Mahvash. He was preceded in death by his brother, Vali. His sister, Safa, lives in Yazd. Aziz is also survived by his seven grandchildren; Aava, Saba, Zackary, Taara, Parisa, Neeka, and Sheyda. His grandchildren lovingly called him Babaee.

Aziz was just released from the hospital after recovering from pneumonia, and died of a heart attack while having breakfast with his friends. He had been in good spirits the week prior, and had settled into his life after returning to Iran four months ago. Chance would have it that Manooch was visiting at that time and had the privilege of seeing him for the last time. Nayereh was also in Iran at the time and had been visiting Aziz at the Baha'i care facility near Tehran. We are thankful he was able to return to Iran, one of his last wishes. He had told us that is where he had wanted to spend his last days.

We remember Babaee as a loving father, grandfather, and friend who worked hard to provide a fruitful life for his family. He took great joy in being with his grandchildren and in the accomplishments of his children. In his free time, Babaee enjoyed spending his time outdoors whether it be walking or just driving around the city. He filled our homes with the sweet sound of his songs and prayers. Babaee will live forever in our hearts.

We are dealing with the loss of our loving Babaee, and we miss him dearly. Please share any stories and memories you have with him below. We invite you to celebrate his life with us at his memorial service on November 4th, 2018 at 4:00pm at the Eastside Baha'i Center, 16007 NE 8th Street, Bellevue, Washington, 98008. In lieu of flowers, we encourage donations in Aziz's name to the Alzheimer's Association.

Babai I remember you describing your children and grandchildren as a garden of flowers. Regardless of the hardship you went through, you gave all you could give in order for your first 3 flowers to reach their full potential...and how gracefully ironic that the flowers nourished and protected the gardener during his last years. I am truly sorry for your loss, always remember the happiness you felt with him around.


May Babai Rest in Peace.

I am so sorry to hear about your loss! you will truly be missed! your legacy will live on thru the success of your children and grandchildren, every time I saw you, you were so kind and welcoming! May you rest in peace! Much love

We are so sorry to hear about your loss! Our condolences to you and your family.
Love,
Reza

Sorry for your loss, may he Rest In Peace , prayers for progress of his soul

Baabaa lived a hard life and worked hard all his life with a sharp focus on his childrens success. He accomplished what he had set out to do. He left unexpectedly but he is where he wanted to be, back home in Iran. After more than 30 years he is back where he belongs. To seven grandchildren, he was essentially the only grandfather they had. We will miss him. You gotta admit, he was one handsome dude with a sincere smile and beautiful eyes (which Aava inherited).

Never miss an update about Aziz. Sign up today.