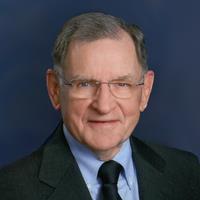 Dr. B. Wayne “Bud” Hopkins of Glen Ellyn, IL, went to be with the Lord on January 6, 2021 at Silverado Memory Care Community in St. Charles, IL, surrounded by loving family.

Bud was born June 14, 1934 in Amarillo, TX to Wayne and Edith Hopkins. After graduating from high school, he worked for a couple of years and then was drafted into the army where he was recognized for his marksmanship. While serving in Korea, Bud contracted polio. As a result of this health crisis, he found his Lord and Savior Jesus Christ. After this, he dedicated his life to serving Christ.

Bud graduated from the University of Texas, Austin, and earned his Masters and Doctorate of Theology from Dallas Theological Seminary. He went on to serve as a pastor in Fresno, CA, then became the Chair of Pastoral Studies at Moody Bible Institute in Chicago, and later was the founding Dean of the Moody Graduate School. He also ministered in numerous churches, including Naperville Bible Church and Chicagoland Bible Church. In retirement, Bud continued teaching at Moody and served as a board member of Village Missions. He was a member of Wheaton Evangelical Free Church for 40 years.

Bud and his wife raised four children and hosted countless friends and family wherever they lived. He loved the out-of-doors and enjoyed relaxing with his family at their retreat home in Wisconsin. Having lived his life in the service of Jesus Christ, Bud would want all to know Christ’s promise of eternal life for all who believe, as is written in the Gospel of John, chapter 3.

He is preceded in death by his parents and his sister Sudie.

A memorial service will be held on Saturday, January 16, 2021 at 11:00 a.m. at Compass Church, Wheaton Campus, 520 E. Roosevelt Rd., Wheaton, IL 60187. Friends may visit with the family from 10:00 until the time of service. Family and friends may watch the livestream link here: B. Wayne Hopkins Service

To our Lord & Mrs. Hopkins thank you for sharing this amazing man with us for these many years. He has forever impacted my life. Always pointing me to Jesus.

We are sorry for your loss.

To all the Hopkins- especially Matt Ruthanne and children- our prayers for your peace are with you. I am so thankful that we do not sorrow as others with no hope because our Lord purchased our salvation. God Bless you all.

How I thank God in my every remembrance of Dr. Hopkins, Marilyn, and their children. I'm so thankful this family took me underwing during my years at Wheaton College. My life is richer having crossed paths with the Hopkins in those formative years. May the God of all comfort give ever increasing comfort to you all. Love and prayers, Cecil Sanders (Headland, AL)

Marilyn,
My deepest condolences. I will forever be grateful for Bud and our times at the Cozy Corner. I will be faithful to pass on what I learned from him.
God bless you Marilyn and your family. May God's comfort and peace sustain you all.
Jose

We are very sorry to have heard about Wayne’s passing. Although, it has been a while since I heard his gentle and even voice, or shared the luxury of a veiled cabin in the woods, they are remembered fondly. His love for Jesus was so obvious, and now he is with Him face to face. We pray THAT hope carry’s you through this time.

We are sorry to not be able to be with you in person, but we send our sympathy and love,

Dr Hopkins was my Theology prof. He had a Texas sound in some of his words. Plus he had a very friendly smile when he spoke about “Central Passages” in the Bible that confirmed truths of God.

He also gave me a biblical view of role of wife in marriage. She is not a door mat but the Bride that the husband sacrificed all for like Christ. It was very obvious he treated his wife that way!

He was one of the teachers I visited at founders week. I last saw him the year he...

Marilyn and family.....You are truly in my thoughts and prayers. I pray for an easy transition for all of you. Some teenage memories bring a smile to my face......Love to all....Rosemary

I was so sorry to read about Bud's passing. Our prayers are with you, Marilyn. Yvonda Stokes

Never miss an update about B. Wayne. Sign up today.