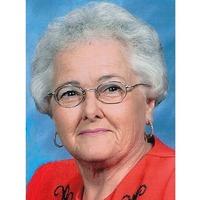 Mrs. Atkinson attended the University of Corpus Christi and graduated from New Orleans Baptist Theological Seminary with a Bachelor of Religious Education Degree.  She served alongside her husband, Dr. Franklin Atkinson, in churches in Mississippi, Louisiana, and Texas.

She worked in the Moore Elementary School Library for 20 years, creating a wonderful learning environment for the students.  She continued her librarian work by making over 15,000 homemade bookmarks for friends, family, mission trip volunteers, and groups who came to Marshall Manor Nursing Facility where she lived for 6 years.  The encouraging messages on these bookmarks as well as messages of God’s love touched people around the world.  Mrs. Atkinson trusted Jesus as her Lord and Savior when she was 6 years old and wanted others to know of God’s great love for them also.

She was preceded in death by her parents, a sister and brother; and her husband, Dr. Franklin Atkinson.  She is survived by two daughters, Ruth (Billy) Hoffman, and Jean (Jay) Davis, and one son, David (Gina) Atkinson.  Other surviving family members are five grandchildren; Jonathan Davis, Stephanie (John) Davis, Natalie (Gary) Phillips, Zane Atkinson, and Kiera Atkinson, along with five great-grandchildren; Joshua, Katelyn and Heston Davis and Will and Cora Phillips

In lieu of flowers, memorials may be made to the Franklin and Barbara Atkinson Endowment Fund at East Texas Baptist University or the Lottie Moon Christmas Offering for International Missions.

The funeral service will be posted on the First Baptist Church Marshall TX Facebook Page.

So sorry to read about both your parents passing so close together. I have such great memories of our families ministries together in Marshall. Our thoughts and prayers are with all of your family. In Christ, Dondra Roberts Fuller, Cascille Roberts, Tim and Lu Ann Roberts

I was a student at J.H.MOORE SCHOOL where Mrs. Atkinson was our librarian she always greeted us with a smile when enter the room she will truly be missed

Dear Ruth and all of the family. We will miss Barbara and Franklin so much. They are some of the best folks we have ever know. We loved having them in Marshall. Dad, Carrol Fletcher, myself, David and Denice send our prayers out to all of you.

We’re thinking of your family.

Ruth, Jean & David,
Jon and I are sorry to hear about your mom. They were always such good friends to Dargan and Narine. Your dad and mom were such sweet people and their kindnesses to so many will be remembered. This is such a difficult time no matter what their age is so please know that we will be lifting each of you and your family up in prayer in the days ahead. He is our Comforter and Protector all the time. Wishing you all safe travels.
In His love,
Jon and...

Ruth, Jean and David,
We are all thinking and praying for you all during this difficult time. We have wonderful family memories to cherish! Love to all - Gloria and Sandy

David and family.......I am so sorry to hear of your mothers passing. I was talking to Kip on phone when he got your text. This is a terrible thing to go through no matter how old you get.....its your one and only mother. I pray that the Lord will help you at this time. She was such a lovely person always; I am glad I knew her.