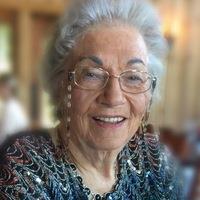 Barbara Irene Fesler  Kersh, 91, of Tyler passed away peacefully at her home on May 1, 2020.  Visitation will be at Jackson's Burks Walker Tippit Funeral Home located at 215 East Front Street on Wednesday May 6th from 11 am -1 pm.   A Private graveside service will follow at Pinecrest Cemetery in Troup, Texas with the Chaplain Robert Carter.
Barbara Irene Fessler Kersh was born December 1, 1928, in San Diego, California to Trevor and Rosamond Fesler. When Barbara was small, her father disappeared leaving her mother to rear her and her sister alone during the Great Depression. Despite these difficulties, Barbara was a happy child. She always treasured her memories growing up in California.  She was especially proud that she along with four other classmates appeared twice in the Guiness Book of World Records, the first time when she began school with her classmates who were all named Barbara and the second time when the five Barbara’s graduated high school.  In 2018, she flew to the West Coast with her son and daughter-in-law to celebrate her 90th birthday with one of the five Barbara’s, Barbara Skopec.
Barbara had a life-long interest in cooking, a family tradition inspired by both her father, a Chef and her mother, a professional cook.  Barbara was pursuing a degree in the culinary arts when she met and fell in love with a Marine who she loved for fifty-six years. He was a distinguished soldier who was one of the few that survived the storming of the beaches in the South Pacific Islands during WWII.
Barbara and James Virgil Kersh married in 1946. They had two sons and a daughter, James Randall Kersh, born in 1949; Dr. Fredrick Wayne Kersh, born in 1956 and Rose Elaine Kersh, born in 1953.  Several years after Virgil died Barbara became engaged to a wonderful man, Ed Poole but sadly he passed away before they could marry.

Barbara worked in food service for the osteopathic hospital in Tyler and in her later years, cared for infants and toddlers in her home.  She was a longtime member of Cedar Street United Methodist Church and served as secretary for over a decade.  She also served as the District President of United Methodist Women’s Association. She was active in both Eastern Star and the Shriners. In their later years, she and her husband, Virgil, enjoyed traveling with the Sharon Shriners RV Club and spent many hours volunteering with their wheelchair program.

Those who knew Barbara enjoyed her outgoing personality and were touched by her genuine interest in others. She loved caring for people and devoted many years to nurturing babies and their families. Barbara’s generosity to others will be missed.
The family is especially grateful to Barbara’s caregivers who were beyond amazing and truly became family: Gracie Godines, Martina Boyd, Belen Penaloza, Kim Medrano, Alibet Vargas, Genoveva Rodriguez, Alma Rueles, Jessica Flores and Maria Flores, their families, David Bulls, Rory Bagwell and the administration at Paradigm Homecare, the staff and volunteers of Alzheimer’s Alliance of Smith County and the staff of The Hospice of East Texas.
Barbara was preceded in death by her husband, James Virgil Kersh; her son, James Randall Kersh; her sister, Beverly Hewitt; her great granddaughter, Victoria Tidwell and her late in life fiancé Ed Poole.
She is survived by her son and his wife, Dr. Fredrick and Linda Kersh of Tyler, their son Ben Kersh of Boston, Massachusetts; her daughter Rose Kersh of Gladewater; her grandchildren Kevin Kersh and his wife Brandi of Ohio, their children, Kaitlyn, Kimberly, Karson, Guage, Logan, Lane and Jaxon; Misty Roberts and her daughter Alissa of Whitehouse and Christy Tidwell, her son Tristan of Tyler Texas and a great great grandchild, Hunter of Tyler. She is also survived by her nephews Alan Hewitt, Steve and his wife, Michelle Hall, Michael and his wife, Suzie Hall, Tony and his wife Lisa Harris, her niece, Jan and her husband Jimmy Singletary.  Virginia Harris, Shelley Kersh, Barbara Skopec, Lon and Cathy Hayne, Billy Baxter, and Debbie Kersh are also related by ties of love.
The family suggests, in lieu of flowers, memorials be made to Alzheimer’s Alliance of Smith County or the Hospice of East Texas.

So sorry to hear of Barbaras passing. She and Virgil were friends with my parents Bill and Betty Scott in the RV club. Your parents were always so welcoming and would help anyone in need. Peace be with your family

One of the sweetest ladies I have ever met. GOD Speed and prayers for the family.

Auntie hummed while cooking or riding in the car. She ended our phone calls with, always remember I love you!

Deepest condolences to the Kersh family. We will miss Barb very much.

Prayers & Gods guidance & strength through this difficult time. So sorry for the loss of your Mom.