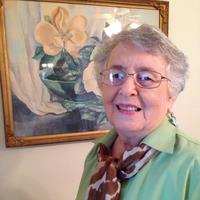 Barbara Anne Willis Thompson, 84, of Moultrie, died September 10, 2020, at Colquitt Regional Medical Center, Moultrie, GA surrounded by her family.  Although the end came quickly, she was able to express her love to her children, grandchildren, and siblings by cell phone while she talked, laughed, and blew kisses to those around her.   She was at peace about leaving her earthly home.  Mrs. Thompson was known as “Boova” to her family and grandchildren.

Funeral service will be held 3:00 PM Saturday, September 12, 2020 at First Baptist Church-Moultrie with the Rev. Matt Peek, Rev. Hugh Ward, and the Rev. Alfred Carver officiating.   Interment will follow in Westview Cemetery.  Social distancing guidelines will be followed, and masks are recommended.

Born September 29, 1935, in her family home in Mitchell Co, GA, she was the daughter of the late Alfred Willis and Rubye Adelia Presley; she married Lester O. Thompson on March 25, 1955 at New Bethel Baptist Church in Colquitt Co, GA.  Mrs. Thompson was baptized as a young girl in 1946 in the creek near New Bethel Baptist Church, Colquitt County. She was a member of First Baptist Church, Moultrie, GA serving in many leadership and participant capacities during her 55-year membership, including Adult Choir, Teacher of Children's Choirs, Women’s Missionary Union, Library Committee, Faith Sunday School Class.  She was gifted with a beautiful singing voice and never hesitated to use that gift to bless others.  She and her husband, Lester, attended and supported their church faithfully their entire life together.  On their short honeymoon they even got up that Sunday morning and attended a local church.   She graduated from Moultrie High School in 1953 and from Valdosta College in 1955.  She was secretary/office manager for her husband's business, Lester Thompson Realty & Forestry until their retirement.  Her love of family and history sent her on a journey to learn more about her family who had lived in Colquitt Co as early as 1865.  When applying for her official birth certificate at age 50, she was surprised to find that her birth name was Julia Annett.  Story goes that after the doctor left, Aunt Pearl Presley wanted her name changed to Barbara Anne, and from then on, she was called Barbara Anne her entire life.  At the annual Presley reunion, she would prepare displays and share her research information with family members.  She was a member of the John Benning Chapter Daughters of the American Revolution.

In addition to her parents, she was preceded in death by her in-laws, Adell and L.M. Thompson.

In lieu of flowers, memorial contributions may be made to First Baptist Church Moultrie, 400 South Main Street, Moultrie, GA. 31768 and/or a charity of your choice.

What sweet memories of a sweet woman!! Loved her story. I know Ms Barbara was loved and is missed but in a wonderful new home! My thoughts and prayers are with you all.

We are so sorry about your loss. Our thoughts and our prayers are with your entire family.

We are so sorry for your loss. She was such an elegant lady. We know you will miss her but hope you find comfort in your memories and in knowing you will all be reunited one day. You are in our thoughts and Prayers. Leslie and Debbie Moore

We are so sorry for your loss. Barbara was a wonderful lady and will surely be missed. We always enjoyed learning about our family history at our reunions. Please know that you will all be in our thoughts and prayers. Love, Jack and Claudia

Barbara, a wonderful lady and friend. Always welcomed you as a dear friend. You will be missed in our Sunday School class.

Paula, sorry to hear about your Mom. She was always so sweet and caring. My Mama loved her and they were close growing up. I know your heat is heavy. Praying for comfort for you and your family. Becky Fleetwood

Such a beautiful Person, Rest in peace! Love to her family.

I pray that you all feel God wrapping his arms around you right now and for the days and weeks to come. Hoping the wonderful memories bring you joy. Love you.

Regina, Paula, and Mr. Thompson I am saddened to learn of Mrs. Thompson’s passing. She was a wonderful mom and such a caring person. I am praying for you all during this time. Love and prayers. Judy Vick Whitehead