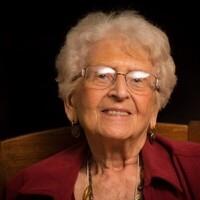 Rochester Hills – Barbara A. Williams-Langer, age 94, died peacefully on Sunday, October 24,
2021 at Waltonwood University Community, surrounded by her family. Her family appreciates the excellent care provided in her last year by Waltonwood and Oakland Hospice.

Barbara was the youngest child of Axel Rudolph and Edna Sophia (Leff) Hallberg, and grew up with her sister, Helen, on Detroit’s west side.

Barbara loved singing and playing the piano.  She sang at McKenzie High School, Wayne State University and in many church choirs. Throughout her 26 years as a kindergarten teacher in Detroit and Royal Oak, she put these same talents to use, along with storytelling and crafting, to launch her students to future successes. For ten years, she led Girl Scout Troop #588 in Royal Oak, from second grade through their senior year at Royal Oak Kimball High School. A lifelong Tiger fan, she seldom missed a game, whether in-person, on radio or on TV. Quite athletic, Barbara could bonk a softball or golf ball quite a distance. She loved a party, especially those that involved playing Bridge, but would never turn down a game of Hearts or Pinochle, so long as friends or family were around.  Her grandkids remember her for always wearing a great looking necklace and having an interesting book in hand,

Barbara planned many a family vacation in northern Michigan to introduce her grandkids to nature with raucous scavenger hunts. She tricked us all into thinking the only way to get used to the cold lake water was by running fast into the approaching waves. As matter of fact, that was her approach to life.

Donations in her memory may be made in Barbara’s name to; Cana Lutheran Church, 2119 Catalpa Rd. Berkley MI 48072, or Girl Scouts of Southeastern Michigan, 1333 Brewery Park Blvd, Detroit, MI 48207.

Please leave a memory or condolence on the online guestbook below.

So many special memories with Nana. She planned the best family games for Michigan cabin vacations, all in beautiful cursive, and filled an entire room off her kitchen with Christmas cookies. We didn't inherit her musical talents but she instilled a lifelong love of reading in the Wisconsin Williams family. She brought poise and style to everything she did and we will miss her wonderful wit and smile. Love, Ben & Alicia & Katelynn & families.

Remembering lunches with Barbara at Macys. We always had good things to talk about and looked forward to those getting together. She was a very social person and spread her warmth and friendliness to all.

What a special lady. She was my Girl Scout Leader and held our troop together all the way through high school. She taught all of us so much; we are all better people because she was in our lives. Prayers and hugs to her family.