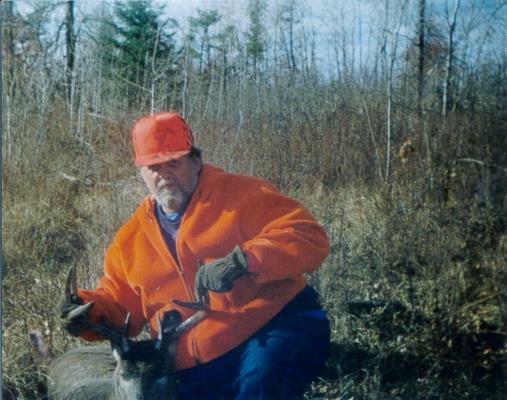 Barry Richard James, age 69, a long time Park Rapids, MN area resident, who formerly had lived and worked in Minneapolis, was promoted into Glory on May 4, 2020 at the CHI St. Joseph’s Hospital in Park Rapids.  He will be deeply missed by his loved ones.
Barry was the son of Marvin and Lela (Cripps) James and was born on October 9, 1950 in Park Rapids.  He attended Park Rapids Public Schools where he grew into manhood.  In 1968, at the age of 18, Barry entered the United States Air Force where he proudly served his country primarily stationed at the Lackland Air Force Base in San Antonio, Texas.  After receiving his honorable discharge, Barry returned to the Park Rapids area and gained employment working for a large turkey farm north of Zerkel, MN.  He also worked for his sister, Violet, and his brother-in-law, Jerry Richards and Jerry’s brothers for the Richards Sawmill and Logging Company near Pine River, MN.  On October 10, 1971, Barry was united in marriage to Linda Dianne Wilkins in Park Rapids.  This marriage was blessed with three children:  Desirae, Daniel, and Barbara.  The young family made their home in the Park Rapids area.  Barry and Linda later divorced.  On October 19, 1985, he was united in marriage to Charlene Gail Roderick in Park Rapids.  This union was blessed with one son, AJ.  Barry and Charlene later divorced.  In 1989 Barry moved to Minneapolis where he gained employment working for the Minneapolis City Parking Ramp Company.  He began working as a custodian, then as a cashier and worked his way up to the position of supervisor in a career that spanned 25 years.  In 2014, he retired and returned to Park Rapids where he has made his home in the Heartland Apartments.  Barry was an avid outdoorsman who loved hunting and fishing.  He also enjoyed watching professional wrestling and playing pinnacle and cribbage with his family and friends.  Each Wednesday morning, Barry enjoyed attending the breakfast at the Grace Community Church in Osage and fellowshipping with his friends there.
Barry will be lovingly remembered by his four children: Desirae Michelle Stalberger of Callaway, MN, Daniel Richard James of Mahnomen, MN, Barbara Jean James of Fargo, ND and Anthony Richard James of Park Rapids; his sister, Violet (Jerry) Richards of Pine River, MN; two brothers: Clifford James and Lorin James both of Park Rapids; 13 dearly loved grandchildren; seven precious great-grandchildren; as well as numerous nieces, nephews, other relatives, and many friends.
He was preceded in death by his parents: Marvin and Lela James; two brothers: LaVere “Doc” and Dennis James; and a sister, Norma Jean.

I knew Barry when he was married to Charlene and also when he worked for the parking in Minneapolis. He was a great guy with a big heart! RIP Barry , you won't be forgotten.

Grief can be so hard, but our special memories help us cope. Remembering you and your loved one today and always. Berry will be missed RIP Berry

May the love of friends and family carry you through your grief. I'm here whenever you need to talk. Love you

Never miss an update about Barry. Sign up today.