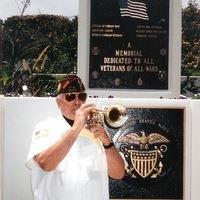 Bernard Joseph Cain Jr. was born March 24, 1925, in Boston, Massachusetts. He was the oldest of four children born to Bernard Sr. and Eileen Cain. In 1943, at the age of seventeen, he enlisted in the United States Navy. He proudly served his country in the South Pacific as a radioman until the conclusion of World War II.

After the war, Bernard  returned to Boston. In 1946, he met the love of his life, Virginia Shea. They were married in 1947, and shortly thereafter moved to California. Using Bernard’s G.I. Bill, they purchased a brand new home in the community of Lakewood.  In 1950, Bernard, who had joined the Naval Reserves upon his discharge, was reactivated into military service and deployed to Korea. He was assigned to a Naval flight crew that patrolled the skies above Korea.

In civilian life, Bernard worked for Western Union for approximately thirty years. He retired in 1985.

Bernard and Virginia raised three sons in their Lakewood home: Bernard III (Claudette), John (Caroline), and Timothy (Angelica). Virginia was called to the Lord in 2007. Bernard lived as an original owner in his Lakewood home for approximately 70 years.

Bernard’s proudest accomplishment in life was that of a grandfather. He was “Grandpa” to Nicole, Matthew, Paulette, Virginia, Michael, Nicolas, and Elijah.

Bernard was a proud member of the American Legion and the Veterans of Foreign Wars. For decades he donated his time as a member of color guards and famously played “Taps”on his bugle to honor fellow veterans who had passed away.

Bernard made the “Greatest Generation” proud to the very end and died a true hero.

Bernard was a positive influence in all of our lives.

The city of Carson will miss Bernies playing of taps at our Memorial Day and Veterans Day ceremonies.

In loving memory of a wonderful man. He always called me the "VillageWolf" due to my name being Villalobos. It was his way of being familiar. I'm sure going to miss him He truely was my friend & so was his fabulous wife Virginia.

To the family and friends of this fabulous, funny man. I enjoyed my time with him on Friday nights at the American Legion. My deepest sympathy. He will be missed by many.

Mr. Cain,
I have many great memories from being friends with your son, Tim and living on the same street as you in Lakewood. You were always very nice to me. Though a man of few words, you always had a strong presence as men of your generation often do. Rest In Peace Sir. Say hi to my mom in heaven.

You will be greatly missed Bernie. Rest In Peace. Until we meet again. Mike and Mina Carrasco

Im so sorry for the families loss. I know Bernie left a great legacy with his Children, Grandchildren & Country. God Bless. Bernie is in Gods Hands now. Friend of Bernie & Claudette. ❤