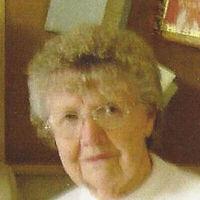 Danville, IL - Betty Jo (Martin) Pearson, 90, formerly of Attica and Danville, IL, passed away Sunday, February 21, 2021 at 11:15 a.m. in the Palm Terrace Nursing Center in Mattoon, IL.
Betty was born in Van Buren Township of Fountain County, Indiana on March 17, 1930. She was the daughter of the late Dewey Martin and Lavetta (Hayden) Norregaard. She was raised and educated in Attica and Foster. She has resided in Danville, IL for 52 years and in Matton, IL since 2012.
Betty formerly worked at Horner Box Company and later Stone Box Company in Danville, IL.
She enjoyed raising her family and cleaning.
On August 15, 1948 Betty married Raymond Pearson, Jr. In Attica. Raymond preceded her in death on December 5, 2006.
She leaves behind two sons, Steve A. Pearson and Kyle D. Pearson, both of Danville, IL; a son-in-law, Tony Greenburg, Danville, IL; a brother, Jimmy (Wendy) Martin, Pensacola, FL; three sisters, Judy Lear, Lafayette; Carol Lester, Green Hill and Katheryn Shaw, Greensburg, IN; four grandchildren and eight great-grandchildren. She was preceded in death by a daughter, Sharon Greenburg; an infant daughter, Carol Pearson;  two brothers, Lawrence and Lester Martin.
Friends may call at the Maus Funeral Home, Attica, on Thursday, February 25th, from 12:00 p.m. until service time at 2:00 p.m. with Pastor Jerry Badgley officiating. Burial will follow in the Riverside Cemetery, Attica. Face masks and social distancing will be required while attending the service.

I loved to hear my aunt laugh! She had a great sense of humor and a positive attitude about life. She kept a spotless home and was welcoming to all her guests and family.

Never miss an update about Betty. Sign up today.