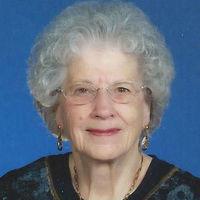 Attica - Betty Louise (Albright) Wells, 96, Attica, went to dance with her Lord and Savior on Thursday, February 20, 2020 at 10:50 a.m.
Betty was born in the St. Elizabeth Hospital, Lafayette, IN on September 16, 1923. She was the daughter of the late Fred Jury and Bevvie May (Rexroth) Albright. She was raised on the farm in Pine Village and graduated from Pine Village High School in 1943. She has lived for several years in Attica where she first worked as a dental assistant to Dr. Paul R. Sullivan for 15 years. She later went to work with Drs. Charles and David Myers in Attica . She also cleaned homes for local families in Attica.
Betty was very active up to her 96th birthday by formerly riding her bicycle and walking around town. She was an active member of the Williamsport Christian Church by attempting to hug the entire congregation each Sunday. She liked to visit in the local nursing centers. She was noted for her “card ministry” by sending cards out to people. She worked at the Attica First United Methodist Church Thrift Shop for over 20 years. In her early years she enjoyed playing softball on the local ladies league. She enjoyed watching sports and her favorite teams were the Indianapolis Colts, Indiana Pacers and Purdue University. More recently you could find Betty chasing down the pickle balls during matches at McDonald Park or dancing on the courts during the summer musicals in the park. She always had a kind word and smile to greet you.
Betty married Richard Harrison Wells on April 11, 1952 in Attica. Richard preceded her in death on October 1, 2007.
Betty leaves behind her daughter, Lisa (Jeff) Troike, Attica; three grandchildren, Karisa Troike, Indianapolis; Kylee (James) Arvin, Chicago and JT Troike, Minneapolis, MN; a great-granddaughter, Clara Arvin, Chicago. She was preceded in death by two brothers, Lee and Otis Albright along with three sisters, Florence Powell, Margaret Slee and Donna Foster.
Friends may call at the Williamsport Christian Church, 20 E. Third St., Williamsport on Sunday, February 23rd from 4:00 -8:00 p.m. and from 10:00 a.m. until service time at 11:00 a.m. on Monday, February 24th at the church with Pastor Jesse Stoner officiating. Burial will follow in the Riverside Cemetery, Attica.
Memorial contributions may be made to the Williamsport Christian Church c/o Youth Group Activities.

Lisa, Jeff, Karisa. Kylee and JT : My Sympathy to you on the loss of your mother and grand mother. She was a wonderful lady. I always enjoyed seeing her. Always with a smile on her face! Sincerely, Ken Fraumann

Betty Wells was my "loneliness angel" when I moved to Attica to teach school back in the early 1970s. We met at church, and quickly struck up a long lasting friendship even though she was 26 years older than I. Many weekend days were spent with Betty attending auctions and shopping in Lafayette or visiting our friend Arletta Oland (who was older than both of us). Betty supported me in so many ways, and we had lots of fun together. I thank God for our 46 years of friendship -...

Laura and I were so sorry to hear of the passing of your mother. At 96 I can only imagine what she saw in her life and the stories I'm sure she told you about those experiences. Those memories keep them in our hearts till we see them again.

So sorry to hear about the loss of your mother. She was one of the sweetest ladies I knew. I have many fond memories from softball and Purdue womens basketball games. I hope the wonderful memories that you have will comfort you during this time and I will keep you in my thoughts and prayers.

May God bless you and your family in this time of sorrow. Our family will pray for comfort during the celebration of the life of your loved one. Im sure she was will be missed by you and all the people she touched during her lifetime. Sincerely. Gary Wilson & family

I will always remember with love & gratitude that I got to know my Pine Village Pine Knots buddy-- even though it was a short time. We had fun singing the PV fight song & dancing on the Pickleball courts. Then we got to attend the PV Alumni that one time when her 3 fellow classmates were there from the 1940's. What a fun night. Brings a smile to my face when remembering. Such a beautiful lady. Love to all.

The few times I was around Betty what I remember was her beautiful smile. Thinking of Lisa, Jeff, and Family. Glenn And Cindy Whitaker

We are so sorry to hear of the loss of your mother. Betty was a precious person who loved our Lord and showed that to everyone she knew. We remember her fondly. She always had kind words and a hug for us when ever we would meet. We know you will miss her dearly but find peace in the fact that you will one day see her again.

Betty was one of the most amazing ladies I have ever had the pleasure of knowing. I always enjoyed getting to talk with her when she walked through the alley behind our house to the store. I know you all will miss her but there is no doubt in my mind that you will see her again one day. To live in the hearts of others is never to die. Rest in peace sweet lady!

Never miss an update about Betty. Sign up today.