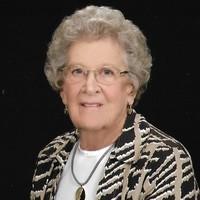 Bettye moved to Littlefield with her family when she was 9 years old.  She married Herb Funk December 20, 1943 in Littlefield.  Together they farmed land in Lamb County, and Bettye was known for her impressive module building skills.  It was said that she could build the tightest square module in the area and she was Herb’s #1 farm hand.  Bettye also worked in the home where she would sew the clothes for their four children and was an excellent cook.  Herb and Bettye celebrated 50 years for marriage before he passed in 1994.  She later married Don Carr March 14, 1997.  He preceded her in death May 17, 2000.  Bettye was very active at First Baptist Church Littlefield where she was a member for over 73 years.  She taught Sunday School for over 38 of those years, and she was also very active in many other ministries there.  Bettye was a loyal reading buddy at LISD; she helped with the Food Bank Distribution; and she visited the sick and homebound and spent countless hours driving people to doctor appointments.

A celebration to honor the life Bettye lived will be 11:00 a.m., Friday, January 10, 2020 at First Baptist Church in Littlefield with Pastor Tanner Wilson officiating and Terry Sanders assisting.  The family will receive friends Thursday evening from 6:00 – 7:00 p.m., at the funeral home.  In lieu of flowers, the family is suggesting memorials be made in Bettye’s honor to the Hunger Relief Fund at the First Baptist Church (400 E 6th Littlefield, TX 79339) or a charity of your choice.  Arrangements are under the personal care of Hillcrest Funeral Home in Littlefield.

Our sincere condolences on the loss of Bettye. She was always kind and showed the love of Jesus. We know she will be greatly missed.

So very sorry to hear of this loss of such a special Christian lady. I have several fond memories of years back. Never saw her without a smile & hug. To children Richard, Roselle, Roseanne, & Ralph my prayers for the coming days as you remember. Love to all Brenda Broaddus Smiley- Holton. ( Houston- Littlefield class 65)

She was a Christian Light for all of us.

Dear Funk Family,
George and I would like to send our deepest sympathy to you all. We both loved her so very much. She was always there for you with a smile. We know she will be missed by so many and that there will be a big hole left in your family. We pray that God wraps his loving arms around each one of you during the days ahead and gives you the grace and comfort that you need. God bless you all.
All our love!
George and Jana Davis

Loved sweet Bettye dearly. My mom (Mary Zoe Owens) adored her and enjoyed every moment with her. She was truly an example of God's unconditional love. You will be missed beyond measure.

What an sweet woman she was, God blessed me by knowing her! My condolences to the family, may you find Peace in her passing.

Ranelle I am so sorry to hear about your mom. I will keep you and your family in my prayers.

A very sweet sweet lady. Rest in peace You are one of a kind. Will see you again in heaven.

Never miss an update about Bettye. Sign up today.