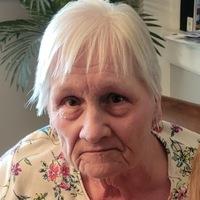 Beverly was employed at Compass Park and Todd-Aikens as a CNA for many years.

She loved her dogs.  She loved and enjoyed spending time with her grandchildren.  She enjoyed reading and watching soap operas.

The family would like to express their gratitude to Johnson Memorial Hospital and Community North Hospital, especially Nurse, Holly at the ICU unit.

In lieu of flowers, memorial contributions may be made to the Humane Society of Johnson County, 3827 North Graham Road, Franklin, Indiana 46131 and/or to the donor’s favorite charity.

There will be no services at this time.  A private burial will be held at a later date.  Flinn and Maguire Funeral Home in Franklin is assisting the family with arrangements.

Expressions of caring and kindness may be received to the family at www.flinnmaguire.net

So very sorry for your loss.
She was a sweet lady for sure.
Sending love, thoughts and prayers to her family.