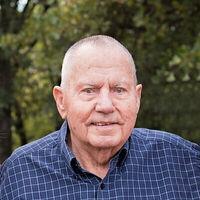 William Scott “Bill” Brown, 94, of Blanchard, died Sunday, November 29, 2020, at his home.  The son of Joseph Alexander Brown and Virginia DeJanie (Earwood) Brown, he was born October 5, 1926 in Birmingham, Alabama.

Bill was a veteran of the U.S. Navy and served during World War II.  He was a devoted follower of Christ.  Bill married Billie Jean McLaren on September 11, 1976 in Burns Flat, Oklahoma.  He retired from the oil and gas industry as a drilling mud engineer and was a member of the 5 Mile Club.  In his spare time, he enjoyed being outdoors, fishing, and hunting pheasant and quail.  Bill’s greatest enjoyment was spending time with his family and friends.

He was preceded in death by his parents; one son, Jerry Lynn McElhaney Brown; two brothers, J.V. Brown and Henry Brown; and two sisters, Syble Coleman and Helen Brown.

A memorial service to celebrate Bill’s life will be held at 11:00 A.M., Monday, November 29, 2021, at the Eisenhour Funeral Home Chapel in Blanchard.  In lieu of flowers, donations may be made to a veteran’s organization or a charity of your choice.  Arrangements are under the direction of Eisenhour Funeral Home of Blanchard.  Online obituary and guestbook are available at www.eisenhourfh.com.

I am so sorry for your loss. I always enjoyed talking about Oklahoma football with Him at our family reunion. I never forgot, we went searching for a Tv that was not being used used for watching,Alabama,Auburn or Florida State so we could watch our beloved Oklahoma Sooners. God bless. Greg Dugan Huntsville, Alabama. One more" Boomer Sooner" for Billy

Billy was a cousin that I didn't know very well when I was younger but got to know him and Jeannie in the past few years and enjoyed visiting with them at our family reunions on Labor Day Weekends. I would have to say he was one of our best looking cousins! Sharon Dugan, Huntsville, Al.

So sorry for your loss. Bill was such a sweet and handsome guy. I remember when he used to come to see Dr. Orme and was always so pleasant. May your family cherish the many memories. You will all be in our prayers. Karen and Gary York

Bill was part of my young life when he visited my parents. As a cousin, he was always part of my life, even though miles separated us. It was always a treat to visit with him when the family got together. He was a sweet guy and very handsome. May God comfort you during your loss.

He was such a good man. My thoughts and prayers are with his family.

Leisa and family i am so sorry for your loss of a wonderful man. Many prayers for you and the family.

Knowing Bill as extended family for 30+ years, he will be missed greatly but fondly remembered! Praying that Gods comfort envelops each family member as they deal with this enormous loss and the adjustments required for the future, and for Jesus' love to provide total peace, KNOWING Bill is enjoying Jesus for eternity. Hugs, love and prayers.

Sorry to hear of Bills passing. May God comfort you all during this time. We've known Bill and his family for many years and we also used to be neighbors. Love and prayers during this time.

Never miss an update about Bill. Sign up today.