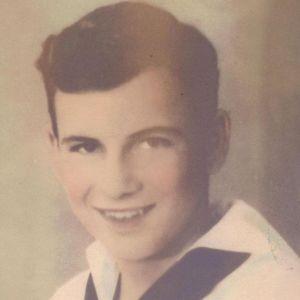 Mr. Billy Speigle Brittain, 94, of Valdese, passed away on Friday, August 7, 2020 at Carolina Rehab Center of Burke County, following a period of declining health. Billy was born April 8, 1926, in Burke County to the late Grace Otis Brittain and Fern Abernathy Brittain. He was a member of the Waldensian Presbyterian Church and worked for the Waldensian Bakery for over fifty years. Billy left high school during World War II to serve honorably in the United States Navy and was given an honorary high school diploma by Burke County Board of Education. Billy was also a member of Lovelady Masonic Lodge #670 for over sixty years. In addition to his parents, he is preceded in death by his red headed high school sweetheart and loving wife of sixty-one years, Jeannette Micol Brittain; sister, Jean Small and husband David; brother Bobby Brittain and wife Jean; and son-in-law, Mack Wendell Mobley. He is survived by his children, Dianne Brittain Mobley, William Micol Brittain and wife Anita, and Donald Brittain and wife Joyce; grandchildren, Mack Wendell Mobley Jr. and wife Wendy, Shea Mobley Ruff and husband Travis, Micol Scott Brittain and fiancée Michelle Clyburn, Jason William Brittain and wife Jennifer, Dennis Brittain and wife Jennifer, and Monica Brittain Gilmore and husband Brad; and great-grandchildren, Michael Shea Benfield and wife Megan, Gracie Ruff, Mack Mobley and wife Jessica, Conner Mobley, Brayden White, Addison White, Sawyer White, Bodie Brittain, and Mia Clyburn. Also surviving are brother, Jackie Brittain and numerous nieces and nephews. A graveside service will be held on Sunday, August 9, 2020 at 1:00 PM at The Waldensian Presbyterian Church Cemetery, with the Rev. Dr. Kevin Fredrick officiating. Military honors will be provided by the United States Navy and the Caldwell County Honor Guard. Masonic honors will be provided by the Lovelady Masonic Lodge #670. The body will lie in state on Sunday from 10:00 AM to 11:30 AM at Heritage Funeral Service in Valdese. Memorials may be made to Burke Hospice and Palliative Care at 1721 Enon Rd., Valdese, NC 28690 or to the Waldensian Presbyterian Church Food Pantry at 109 Main St. E., Valdese, NC 28690. An online guestbook and obituary is available at www.heritagefuneralservices.com Heritage Funeral Service & Crematory of Valdese is serving the family.

Donnie, Diane and Mike. We are so, so sorry for your loss. Our thoughts and prayers are with your families. Michael and Diana

Sorry for your loss. Our prayers are with you.

Dianne and family. Deepest sympathy in the loss of your father. You are in our thoughts and prayer.

Sending healing prayers and comforting hugs. I am so sorry for your loss.

Dianne, Micol, Donnie, Shea and all of your family,
Thinking of you and sending prayers in the days ahead.Bill was loved by many. I have so many wonderful memories of our families. Spur of the moment homemade ice cream on a hot summer day, trips to Clearwater Beach, Christmas eve visits and present exchanges just to name a few. We never did visit the Brittain's-it was always "Bill and Jeanette's". Dad (Boyce) and Bill shared many years of friendship not only from working...

Our prayers are with you at this sad time. Our deepest sympathy.