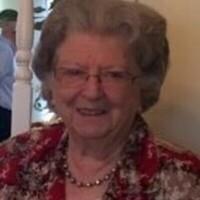 Bobbie S. Cook, 90, retired homemaker, went to dwell in the everlasting arms of her Lord and Savior on Monday, June 8, 2020 at NHC Somerville, TN.  She was born to Avery and Novel Lynn Pitts Shepherd on March 28, 1930 in Humboldt, TN.  She was preceded in death by her beloved husband, James A. Cook of 61 years.  She served faithfully, as a church nursery worker and later as a Sunday School teacher at Range Hills Baptist Church, Memphis, TN. She was a past member of the Oakwood Baptist Church in Milan and she graduated from Milan High School in 1948.

Besides her parents, she was preceded in death by her husband James A. Cook and a son in law Tommy Hughes.  She is survived by her siblings; Joyce Jones (Joe) of Buchanan, TN, Wayne Shepherd of Nesbit, MS, Robert J Shepherd (Sue Ann) of Pensacola, FL. She is survived by her four Children; Steve Cook of Somerville, Paula Hughes of Arlington, Amy Walker (Leo) of Somerville, and Tim Cook (Brenda) of Oakland, three grandchildren, Michelle Williams (Jon), Brian Hughes (Jamie), Melissa Walker, and four great-grandchildren, Christian and Gavin Williams, Elisha and Levi Hughes, several nieces and nephews and many special friends and their families.

In lieu of flowers, memorial may be directed to the Gideons International.

She was a very sweet inspiration to everyone who knew her

Mrs. Cook, was one special lady. Always smiled and had a very sweet laugh. Her and her family have been a large part of my life and you could always call on them for anything. I know she is in heaven with all her loved ones and no longer in any pain. She will be an angel looking out for her family she left behind. Thank you Lord for sharing her with all of us, and putting your arms around the family, at this time of sorrow. Mrs. Cook, you will be so missed,,, I love you always..... ...

I will miss Aunt Bobbie! She was an amazing strong woman and loved her family fiercely! She always made us feel welcomed! I wish I could be there, but I am praying for Gods peace and comfort for all of you. I love you guys!

Loved getting together with her and having lunch that last time I came to her house in Oakland. such a nice day.

Joey & Cheryl Jacquez love y'all
My sympathy for Amy & Tim Bobbi is a Beautiful Woman her smile and love for people. Knowing her was a greatness for those that came to know her.

So grateful God placed you in our lives. A much needed dear Christian mentor and friend to our mother. You went above and beyond being a neighbor. I sincerely hope our heavenly mansions will have a connecting gate. I picture such a sweet reunion of many from the old days of my childhood and I'm thinking of you with Jesus! I'm keeping all who love you in prayer for comfort and peace in all they face. Your precious family is special to me. You are already missed so...

So sorry for your loss! She was such a great example of a Christian woman.

Mrs. Cook was a sweet and special soul. My wife and I and Family will miss her!❤✝

Keith and Pamela Hogue and Family

Never miss an update about Bobbie. Sign up today.