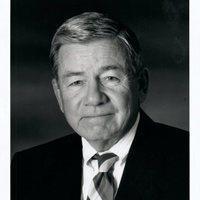 Eben Bradley (Brad) Jones, 91, of Vero Beach Florida died peacefully at home surrounded by loved ones on September 1, 2019, after a lengthy illness, and beautifully cared for by his faithful caregivers. Brad was born in Cleveland Ohio on November 8, 1927. He graduated from University School in 1946 and from Yale University in 1950. He later graduated from the Harvard Business School Advanced Management Program. Brad was hired by Republic Steel Corporation and rose through the ranks to ultimately become Chairman and Chief Executive Officer of Republic Steel and then CEO of the LTV Corporation. Upon retiring from LTV, Brad became a busy trustee for multiple corporations including Fidelity, TRW, CSX, National City Corporation, Cleveland Cliffs, Birmingham Steel, and RPM. He loved his hometown city of Cleveland and gave generously through his leadership on numerous boards including serving as Chairman and President of the Board of Trustees of the Cleveland Clinic, University School, Laurel School, and the United Way of Cleveland. He also served on the boards of the Cleveland Museum of Art, The Cleveland Orchestra, and Playhouse Square. Brad was especially privileged to be a member of Augusta National Golf Club. He was awarded the University School Alumni Graduate Award and named a Distinguished Fellow of The Cleveland Clinic Foundation. In Vero Beach he served as Trustee of the John’s Island and Riomar Clubs and President of Riverside Theatre and was particularly proud of the growth of this local theatre during his stewardship.

Throughout his life, Brad remained a very humble person who was respected widely for his integrity, gentle manner, thoroughness, thoughtfulness, and loyalty. Though his accomplishments are many, Brad is most remembered for his deep commitment to friends, community, and most importantly of all, his love of his family.

A celebration of life will take place at 11 am, Saturday, October 5, 2019 in the chapel at The Community Church of Vero Beach.

In lieu of flowers, the family requests donations be made in Brad’s honor to Indian River VNA Hospice Music Therapy program, Riverside Theatre, or the charity of your choice.

A remembrance from special days together at Augusta and The Masters.
Even more connected as all my sons and now a grandson were/at Camp Pemi and loved Brad Jones Day there!!

A wonderful gentleman with a great sense of humor. He never forgot to remind me that he had served a tennis ball into the back of my head sometime in the '80's. We would both laugh at the memory. My sympathies to Ann and family as Brad had been ill for quite a while.

Our prayers go out to your family as we heard the news today. We did not know Brad personally, however my son is a Camp Pemi Alumn as well and has many great memories of Brad Jones day in his recent years at camp. He wanted to pass along his condolences. As Vero Beach residents, it would have been something special had the two met. We keep your family in our hearts.

Never miss an update about BRAD. Sign up today.