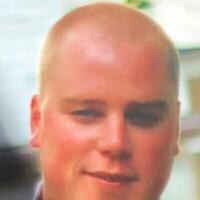 Brent was born in East Stroudsburg, PA on October 30, 1982, a son of Sherry (Miller) Haycock of Bangor and the late Ricky D. Caiazzo.

He was the husband of Brianne (Beesley) Caiazzo. They celebrated their 12th wedding anniversary in May. He was a 2001 graduate of Bangor High School.

He was employed as the Store Manager of Miller's Paint Store in Bangor. He enjoyed gardening, coaching Cal Ripkin Baseball in Bangor, and spending time with his children and family.

He was a member of Trinity Evangelical Lutheran Church in Bangor, PA, and a member of the Roseto Rod and Gun Club.

In addition to his wife, Brianne, and mother Sherry, Brent is survived by a daughter, Brooke, two sons Blake and Brayden, two sisters, Janelle Litchard, wife of  Brent, and Braie Haycock, a Step Father Gary Haycock, Maternal Grandparents Duane & Janet Miller, and many aunts, uncles, cousins, nieces & nephews. He was preceded in death by a sister Paige Caiazzo, and paternal grandmother Gloria Jackson.

Family and friends are invited to call from 5 to 7 PM on Friday, September 11th at the
James B. Gaffney Funeral Home, 314 S. First Street Bangor, PA. Due to the COVID-19 restrictions, only 25 people will be allowed in the visitation room at a time, face masks and social distancing are required at all times. Services will be private at the convenience of the family. Online condolences may be offered at gaffneyparsons.com.

In lieu of flowers, memorial contributions may be made to Caiazzo Family, c/o Funeral Home. 314 S. First Street Bangor, PA 18013, to be used for his children's education.

Sherry and family,
I am so sorry for your loss. May the love of friends and family carry you through this hard time.

May God bless your family in this time of sorrow. You are all in our thoughts and prayers.

Dear Caiazzo and Miller Families, our heartfelt sympathies in the loss of your son and grandson. I had conversations with Brent about making decisions on paint and proper painting tips. He was always kind and so helpful! Tighe and I pray that he is at peace and that your broken hearts will heal and find joy in your many wonderful memories. Sincerely , Tighe and Kathy Scott

So very sorry for this tragic loss. We pray that God wraps His loving arms around all of you and gives you comfort and peace.

Dear Millers, Haycock’s and Caiazzo families,
We send our heart felt sympathy and prayers to all. Having met him at the store , my husband remarked what a fine boy he was. I think back years when you Mr Miller dedicated so much of your time to the youth of the Slate Belt. You were always such a wonderful influence . You poured the same time and energy into your children and grandchildren . Our thoughts are with you all. Praying especially for your comfort and peace during this terrible...

Sherry and family I am so sorry to hear about Brent. He was a fine young man and will always cherish the memories I made coaching him. My thoughts and prayers go out to you and your entire family,

Brianne, Brooke, Blake, Brayden and Brent’s family, My prayers and condolences to you all at this difficult time. Gone way to soon I cannot begin to imagine the pain you are feeling. Cherish all your wonderful memories may God bless you all.

Sherry, Gary, Janet, Duane & Family,
We are very sorry for your loss. Our prayers are with you.

Dear Brianne, Sherry and family,
Most sincere condolences to everyone. You are all on my mind during this difficult time. Sending you lots of love and prayers for strength!
Squeeze those kids extra tight.

Never miss an update about Brent. Sign up today.