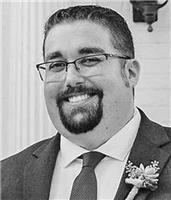 Brian Edwin Lee passed away peacefully and surrounded by his family on June 24, 2020, at his home in Copley, after a courageous battle with cancer. He was 35 years old.

Brian was born on March 28, 1985, to Stuart and Dawna Lee in Yuba City, California, where he spent his early childhood. It was there that he learned to love the California weather - something he never quite got over in his new home here in Ohio, to which his family moved in 1997.

He graduated from Copley High School in 2003. While at Copley, Brian was in the choir, band, and played football. It was also at Copley that he met his future wife, best friend, and partner-in-crime, Felicia. Brian then briefly attended Kent State University where he studied Computer Science. He and Felicia welcomed their son Ethan into their lives in 2005, and were married that same year.

After being a stay-at-home parent to Ethan, a job at which he was magnificent, Brian searched for somewhere to begin his professional career. He landed at Westfield Insurance where he worked for nearly six years leading up to his illness. While there, he met many people who had an immensely positive impact on his life.

He counted himself very lucky to have found joy in the work that he did. While Brian held multiple roles in his time there, he felt most rewarded when he was part of their education team, and teaching others was something at which he truly excelled.

Friends and family will remember Brian as someone who could light up a room. He always had a joke to tell, a smile to give, and a shoulder to cry on. He could make a friend anywhere, and put people instantly at ease with his quick wit and affable demeanor. Brian was a phenomenal father, husband, son, brother, and friend.

He was endlessly patient, wise beyond his years, and a kind soul. Brian loved music and had a wonderful voice - one of his favorite activities was singing along with Felicia to as many of their favorite songs as they could think of in an evening -usually to the detriment of their sleep. Brian was a lifelong San Francisco 49ers fan, was happy to have "adopted" the Cleveland Indians after moving to Ohio, and after only minor cajoling from his wife, became a Pittsburgh Penguins fan.

An avid cook, Brian loved being adventurous with food - trying new recipes, new restaurants, new cuisines - and always trying to one-up Felicia in the kitchen. He knew he had become a true Ohioan when he started running his smoker and grill outside in -20 degree weather.

Brian was an animal lover who enjoyed watching the birds, admonishing the raccoons that stole the bird seed (and once an entire bird feeder!), and doting on the family dog, Sammy. More than anything else, however, he adored being a father and husband. Guiding and teaching Ethan was something that came naturally to Brian, and he took great pride in the young man that Ethan has become. His counsel, patience, love, and laughter is something Felicia will dearly miss.

He was preceded in death by his paternal grandfather, Carl Lee.

Felicia and Ethan would like to specifically thank Brian's oncologist, Dr. Laurie Matt-Amaral, his nurse practitioner, Erika Gross, his nurses at Akron General Cleveland Clinic, Barb and Kim, and his entire hospice team. They fought hard alongside him during his treatment, and made Brian's final journey easier and more comfortable. For that, his family is eternally grateful.

One of Brian's favorite literary quotes, from John Green, was "Thomas Edison's last words were 'It's very beautiful over there.' I don't know where 'there' is, but I believe it's somewhere, and I hope it's beautiful."

A private celebration of Brian's life will be held at Hummel Funeral Home followed by interment at Spring Grove Cemetery in Medina. The family welcomes Brian's friends and coworkers to join them at calling hours on Sunday, June 28, 2020, from 2PM to 5PM, also at Hummel Funeral Home, 3475 Copley Rd. in Copley. Covid 19 social distancing and face masks required.

In lieu of flowers, please send donations in Brian's memory to the Pancreatic Cancer Action Network (PanCan.org) or to the Cleveland Clinic Foundation. Bri - I'll see you on the flip side. I hope it's beautiful.

Arrangements are under the direction of Hummel Funeral Home, 330-253-6126.
Share online condolences at
www.appealdemocrat.com

I was so sorry to hear of your loss. Please accept my deepest condolences. Your entire family is in my prayers. Luci Trifiro

Stuart and Dawna,
So incredibly sorry and sad to learn of Brian's passing.
Sharing in your heartbreak as you remember Brian.
Sending warmest wishes, hugs and with deepest sympathy,
David.

To the Lee family. May you find peace and comfort in cherished memories of a life well lived.

Dawna and Stuart and family,
We were so sad to read of Brians passing. It sounds like he had a wonderful life and made the world a better place. We are very sorry for your loss, and you are in our thoughts and prayers.

Aunt Dawna and Uncle Stewart, Katera and I are heartbroken and so sorry for your loss.
One of my fondest memories of Brian is the summer we spent with Nana and Papa Don in 2000.

You guys are all in our thoughts and prayers.

Felicia I'm so sorry for your loss. I'm a friend of Rachele's (former Signet co-worker). My boys are just a little older than Ethan and we talked about our families a lot. My thoughts and prayers are with you all during this difficult time.