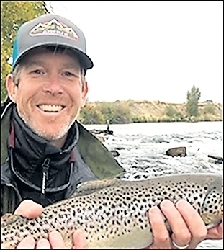 Not the right person? See All ›
LOCATION
Victor, Idaho
CHARITY
The Charity of your Choice
Make a donation

Brian Gray McDonnell January 30, 1969 - December 5, 2019 VICTOR, ID - In the shadow of the mountain range he loved so much, Brian Gray McDonnell passed away peacefully - with family and friends by his side - at home in Victor, Idaho on December 5, 2019. Brian was born on January 30, 1969, in South Bend, Indiana, grew up in Charlotte, North Carolina, attended Saint Ann Catholic School, and graduated from Charlotte Catholic High School and East Carolina University. Brian spent his 50 short years taking on life with strength, courage, and adventure. He solo-hiked the Appalachian Trail southbound in 1997 where he met Jennifer, his partner in life, on a stopover. Soon after, they continued hiking the Great Smoky Mountains section of the trail together. A few months later they moved to Jackson, Wyoming, built a home, a business (Leisure Sports), and a beautiful family together. As an avid backcountry skier, mountain climber, snowmobiler, oarsman, and a dedicated member of the Teton Search and Rescue team (Teton County, Idaho), Brian was most comfortable exploring the mountains and the rivers he loved. He climbed Mount Hood, Mount Adams, and Mount Rainier back-toback over a seven-day period in 2014 before learning of his colorectal cancer illness in 2016. Still, his favorite climbs were right here at home among the peaks of Grand Teton National Park. After his diagnosis, Brian kept a regular schedule of adventure between surgeries and treatments, which included rafting the Main Fork of the Salmon River, summiting the Grand Teton for his seventh time, chaperoning his girls' off-piste class field trips, and, most recently, hiking the Grand Canyon Rim-to-Rim Trail. His fun-loving nature never dimmed, not even for a minute, and his unwavering strength - in the face of danger - was admired by his peers. In addition to his adventures, Brian was passionate about raising awareness of colorectal cancer, urging others to educate themselves on the signs and get screened early. Teton Gravity Research worked with Brian early in his battle with cancer and produced the documentary Mountain in the Hallway (tetongravity.com/films/ mountain -in-the-hallway). Brian, his wife Jen, and his two girls, Hailey and Lily, traveled the world together - each trip carving precious memories into the fabric of their story. The pillar of his family, Brian tackled every goal (both in his life and in the mountains) with sheer endurance and hard work. His happiest moments were spent in the wilderness, camping, boating, and exploring with his entire family. Brian is survived by his wife Jennifer Ferro McDonnell, daughter Hailey Gray McDonnell, daughter Lily Addison McDonnell, his father Robert McDonnell and step-mother Sara McDonnell, his mother Maryan Ellis Binkley and step-father Joseph Binkley, his competitor, best friend, and brother Sean McDonnell and his wife Edith Alston McDonnell and children Julia Gray McDonnell and May Alston McDonnell, his stepsister Tiffany Hinson and her husband Minor Hinson and children Minor Hinson III and Sara Frances Hinson, and step brother Owen LaFave and his wife Melissa LaFave. Memorials can be made to the charity of the donor's choice or to the Teton County Idaho Search and Rescue, 557 North Main Street, Driggs, ID 83422. A memorial service for Brian will be held in Charlotte during the spring of 2020.

What an amazing young man! I also watched his documentary, and it was very moving! What a warrior he was! I am truly sorry for the loss of this amazing man.

I just watched the documentary and was so moved by Brian's story (and Tate's). I saw the obituary in December in the Charlotte Observer, and was so impressed by this powerful and amazing man. What an inspiration. My heart goes out to his family and loved ones.

Brian's well written obit caught my eye this morning. I am a proud graduate of ECU, Class of 70, and it was very nice to read about the life of a fellow alum. The film about his struggle with cancer was very, very good. May he Rest In Peace.