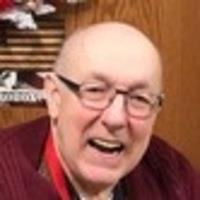 Bruce was a valued employee of Cardinal Stritch University for over 37 years, retiring in 2002. From 1970 on, he was actively involved and was a former state president for ARC, the Association for Retarded Citizens. In 1987, Bruce was awarded the prestigious Bill Sackter award, national recognition celebrating his growth from institutional living to becoming an independent contributing member of society.

Bruce was also a longtime resident of the Milwaukee Catholic Home and very active. Upon entering his apartment, one would quickly determine Bruce’s love of the United States and of the Irish by the artwork and cherished mementos from his travels.

Visitation will take place Tuesday, June 23 from 4 PM to 7 PM, with remembrances to follow, at the Feerick Funeral Home in Shorewood. Mass of Christian Burial will be celebrated at 10 AM Wednesday, June 24 at St. Monica’s Catholic Church, 160 E. Silver Spring Dr., Whitefish Bay. Private interment at Wisconsin Memorial Park.

My dad spent 8+ years on the 3rd floor @ MCH before he passed in late November. Bruce was a regular attendee at our mealtime visits and group functions. He always wore a smile and had a story to share. Dad will be glad to visit with Bruce again now where there are no longer limitations or ailments. Wishing your family peace and fond memories. Notice of services were regretfully only received today but we are keeping you in our families prayer chain.

Bruce and family will be missed by all at Milwaukee Catholic Home where he has been like family to many. Bruce was involved in everything and dressed up for every major and minor holiday. I have particularly fond memories of his Irish Fest excitement and having him at MCH picnics at the lakefront. Sending prayers for peace. Enjoy the memories.

Bruce and his family go back to the early 1950s with my family. His father and mine were colleagues and very close friends. I have fond and vivid memories of picnics at their beautiful home when I was young. Playing with the fox terrier puppies was always a treat. Although my older sisters knew Bruce better than I did, I did get to know him in the late 70s-early 80s when I worked at the Walden Bookstore at the old Bayshore Mall. He and his friend would often stop in to say hello and chat. He...

You will be missed by your dear sisters. They talked about you quite often. Rest in Peace God bless you. Jill Cichacki family friend and caregiver

Best Family
May your hearts soon be filled with wonderful memories of
joyful times together as you celebrate a life well lived......
Our Family has fond memories of Bruce while working and as students
at Cardinal Stritch University and some visits at Catholic Home.He always loved a good conversation...Love & Prayers
Mary Anne Butscher & Family

May the road rise to meet you.
May the wind be always at your back.
May the sun shine warm upon your face;
May the rain fall soft upon your fields,
Until we meet again,
May God hold you in the hollow of His hand.

Lots of good memories with Uncle Bruce over the years. My heart breaks for your family! Lots of love to you all!

Never miss an update about Bruce Laurence. Sign up today.