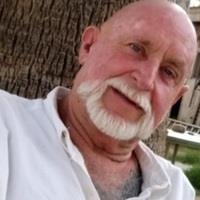 Burt Campbell, a long-time resident of Blythe, CA passed away September 19, 2020 one day short of his 73rd birthday.

He came to Blythe in 1991 and opened up his Bail Bonds business. He retired in 2014 and had been enjoying life with his friends and family.

Burt enjoyed riding his horses and taking care of them. He always had a smile for you and advice. He will be greatly missed by many.

Burt is survived by his son Peter Campbell and three sisters, Cydney, Colleen and Christy.

Burt was preceded in death by his parents, Paul and Lorna Campbell, one sister Candy and one son, Paul.

There will be a memorial service held at Frye Chapel & Mortuary on Monday, October 5th at 10:00 am.

Burton , will be be greatly missed he was a long time friend to our Family. He was allways there to give a helping hand. Condolences to his family.

In loving memory of a wonderful person. Burt was a nice person, always cheerful and fun to talk to. I will miss him.

He was a great man

May your hearts soon be filled with wonderful memories of joyful times together as you celebrate a life well lived.
Burton was a good man. I will miss him dearly

May he rest in peace

Burton and I have been friends for over 20 years. He loved to fish for Bass and Flathead catfish. We spent many nights and days fishing together. He always had a way of cheering you up if you were down. I will miss him greatly. He was the best friend I had.

Burton was a good customer at Ace. He would always put a smile on our faces even on a bad day! He will be truly missed. R.I.P. Burton. My condolences to your family.

Never miss an update about Burton. Sign up today.