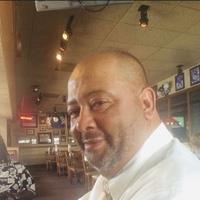 Calvin Dean Hendricks was born on September 15, 1966 in Enfield, North Carolina. He was the youngest child of the late Cora Lee and John Henry Hendricks.
He was raised in Enfield, North Carolina and educated in the Halifax County Public School System.
Affectionately known as one half of the “Tarheel Travelers”, Calvin enjoyed cooking, fishing, hunting, collecting vintage cars, cruising on his beloved vintage Harley Davidson, riding his horse June and listening to Southern Soul music.

Prior to his illness, he was the owner/operator of Renay’s Trucking.
He was preceded in death by his mother, father, brother, Donnell Hendricks and sister Deborah Ward.

My condolences to the family

May God hug you all for me , just continue life building on his strengths

To my cousin Sharlice, my heart and love goes out to you, i am so sorry for your loss giving you strength and our heartfelt condolences.

Man I’m going to miss you until we meet again

Calvin had such a huge presence and a unique sense of humor! I’m sure he’s up there in heaven with a pug hanging out with all his friends and loved ones.

Our sincere condolences to the family. Dean will be dearly missed by us all but never forgotten.

Never miss an update about Calvin. Sign up today.