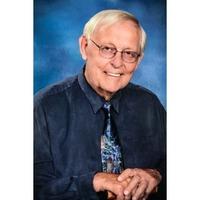 
Carlton "Ozzie" Anderson, 85, departed peacefully in the presence of family from his home at Diamond Willow in Park Rapids, MN on the evening of March 11th.

He was born December 28th, 1934 in Litchfield, MN to Carl John and Ellen Lydia Anderson and was raised in Wayzata, MN. As a high school athlete, Ozzie was recognized for his desire to win and competed in football, basketball, baseball, and golf. He was also a member of the chorus and his senior class play. His Wayzata High School yearbook claimed he was admired by everyone for his friendliness and good humor.

While pursuing a BA in English from Gustavus Adolphus College, St. Peter, MN, Carlton Anderson, ' 56, continued his athletic pursuits and was ultimately inducted into the college's Athletic Hall of Fame in 1990.

On June 18, 1960, he was married to Anita Lien, of Battle Lake, MN a graduate of Gustavus' Class of '59 at Diamond Lake Lutheran in Minneapolis, MN. During his courtship and marriage season, Ozzie served as a member of the Army National Guard on three separate stateside assignments.

The couple moved to Park Rapids, MN in 1961 and raised three children, Laura, Lynn, and Paul while Ozzie taught English at the high school and coached sports. He also served as an advisor for the Fellowship of Christian Athletes and the AFS foreign student exchange program. Ozzie was a member of the Lions Club, community choir, and Calvary Lutheran Church,

where he attended a Friday 7 a.m. men’s meeting for nearly 50 years. He and Anita both received Masters of Education degrees from Bemidji State University.

Before coaching a winning baseball team all the way to runner-up in the Class A state baseball tournament in 1986, Ozzie had also gained a new daughter, Alissara Srivattana, an exchange student from Thailand, whom he has loved as his own.

Ozzie served on the board of the Assemblies of God church and spent several summers out of state grading Advanced Placement English papers before retiring in 1993. Upon Ozzie's retirement, the couple moved to Guam to teach and travel the Pacific Islands.

He was preceded in death by his parents, his brother Bertram, and his son Paul Carlton.

Those who knew him recognized Ozzie as a man of faith in Jesus Christ with strong principles and a loving heart. He had a very special way of connecting to everyone he met, with kind and inclusive eyes that showed his respect for each person's story. This was true even to his very last days.

A private graveside service will be held on July 11,2020 and a celebration of Carlton's wonderful life will be held next summer when the risks of COVID-19 subside.

It was as though we were in search of the Holy Grail.

To Ozzie, baseball was much more than a game. It was a major part of his life. He had come up through the ranks from Little League to high school to college, participating and excelling at each level. As a testament to his abilities, he was inducted into the Gustavus Adolphus Athletic Hall of Fame in 1990.

I met Ozzie in 1976 when I was hired as a Middle School English teacher in Park Rapids. Ozzie had been a high...

Mr. Anderson was an amazing teacher! He understood that all students don’t learn the same way. His teaching ability impacted me, tought me how to study, gave me courage, and made it possible for me to be successful in college. I had an amazing trifecta of teachers at PRHS and I was so sad to hear of his journey. Love to his family and thanks for sharing this wonderful man!

Thx for all the lessons I learned from you, Ozzie, on and off the diamond. I’m so glad we reconnected a few years ago here in Illinois. I’ll always remember your fighting spirit and sense of right and wrong that you lived daily. God speed.

Paul's dad taught me my first Shakespeare; memories of posterboard and Latin lessons and 9th grade English class always pop up when thinking about Julius Caesar. "May flights of angels . . ."

Carlton was my English teacher at Springfield High School in the late 1950s. He also coached sports there. He expected a lot of his students and he gave back to them even more. My family and his met again in the early 1980s in Park Rapids. My sympathies to Anita and his children.

My condolences to the family. Ozzie was a great coach, teacher and mentor. He taught & coached baseball fundamentals and life lessons that carried beyond high school baseball. He is and was a great human being and knew about the art of being human. He nominated me to the PR HS Athletic Hall of Fame in 2010 and I'm very grateful for that honor. Ozzie, you will not be forgotten. Rest in peace.

Sincere Sympathy for your loss.

I had the privilige to know this man first in high school in about 1971 as a teacher when we called him Mr. Anderson -- in an English class he taught called Literature of Sports. He was probably the best teacher of writing I had in high school -- both eloquent and down to earth. Much later over the past few years I connected with him again and he urged me and others to call him "Ozzie". I hope they still make teachers like Ozzie. He was a classic. I also learned recently about his...

Never miss an update about Carlton "Ozzie". Sign up today.